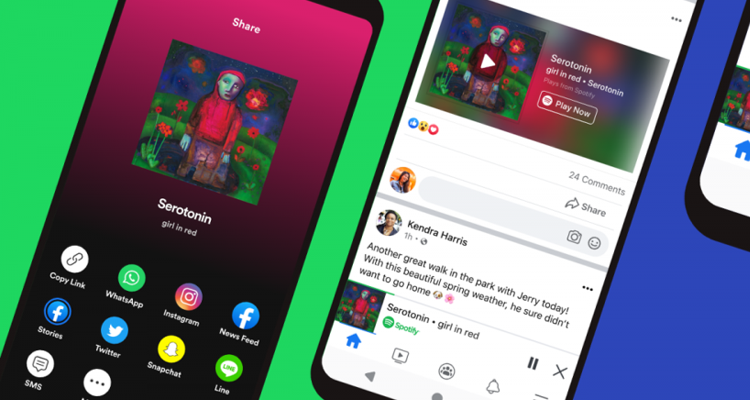 Spotify’s partnership with Facebook is here – a new Spotify miniplayer is now available.

Spotify says this new experience is ‘driven by social discovery,’ to allow listeners to enjoy Spotify within Facebook. Spotify Premium users can discover and experience songs from within the Facebook app on iOS and Android. Free users can enjoy the experience with shuffle mode only, featuring ads from Spotify.

The new feature will also give artists the ability to promote their new content directly on Facebook. The miniplayer can pop up on verified artists’ posts, or even in user-uploaded videos on Facebook that contain licensed music. Spotify bills it as a tool for gaining massive reach on Facebook.

But it’s also a way to team up with Facebook against Apple Music. Spotify is fighting with Apple on several fronts. It no longer wants to pay the 30% ‘Apple Tax’ that is subject to operating on iOS. But Spotify doesn’t want to step up the bar and pay artists better royalties, either. Meanwhile, Facebook is salty with Apple because of changes made to its privacy terms, making ads less targetable on iOS if users opt-out of sharing their information.

Opening the new Spotify miniplayer on Facebook is a pretty simple process. Here’s how to get started.

With the Spotify miniplayer, music playback continues even as you keep scrolling in your News Feed. You have control over playback options so you can control or dismiss the miniplayer. While Spotify and Facebook are trying their hardest to make it seem revolutionary – people were doing this with MySpace pages back in 2006.

Where is the Spotify miniplayer available?

Spotify says it is committed to bringing the Facebook integration to more markets in the ‘coming months.’