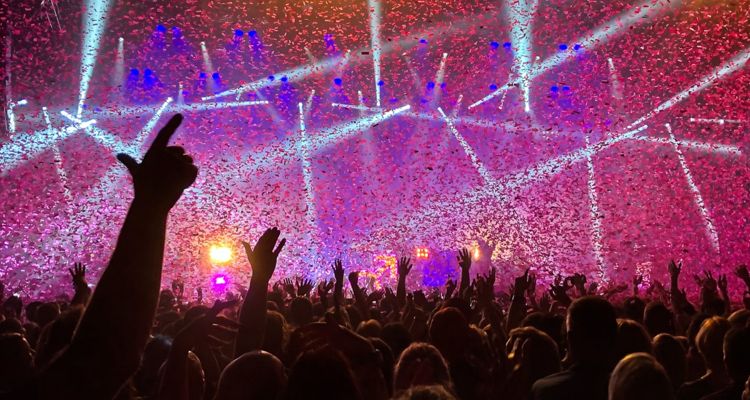 “Many of the royalties paid out last year were collected before the first lock down, meaning that the sharp decline in income will be felt by music creators through 2021 and beyond, with distributions expected to fall by at least 10%,” PRS for Music says in its latest report.

The majority of live music events in the UK were cancelled or postponed due to COVID-19. That includes hundreds of high-profile music festivals and arena tours, like Gastonbury or Madonna’s UK tour. “Of the £11.3m collected, most related to live music events staged towards the end of 2019 and in the first quarter of 2020,” the PRS for Music report states. “That includes concerts from The 1975, Sterophonics, Mabel, and Madonna’s UK tour.

Public performance revenue overall, including live music events and music in businesses, shops, and pubs saw a significant downturn of 61.2% last year. Revenue collected dropped from £136m to just £86.2m collected in 2020 due to business closures PRS for Music confirms.

“This downturn is due to PRS for Music’s policy to only charge businesses for when they have been open and able to play music,” the report states. Revenues from the hospitality and nightlife industries were the most affected. International royalty income continues to be the largest revenue stream for PRS for Music members. But it still saw a 10.7% revenue drop compared to 2019.

One reason for the decline in international revenue is the closure of the tourism industry. Cruise ships did not operate most of last year, and royalty collections from that market were reduced by 75%.

With the exception of commercial radio, overall revenue from UK broadcasters remained stable. It only saw a 2.6% decline in 2020. A reduction in commercial radio advertising meant radio royalties fell 9.2% in 2020. Revenue generated from music played online was the only area to see growth in 2020 – rising 5.1% compared to 2019.

In 2020, PRS for Music licensed over 30 new online platforms, including TikTok and Triller. A sharp rise in the popularity of live-streamed concerts also contributed to growth online and may create new revenue streams in 2021.