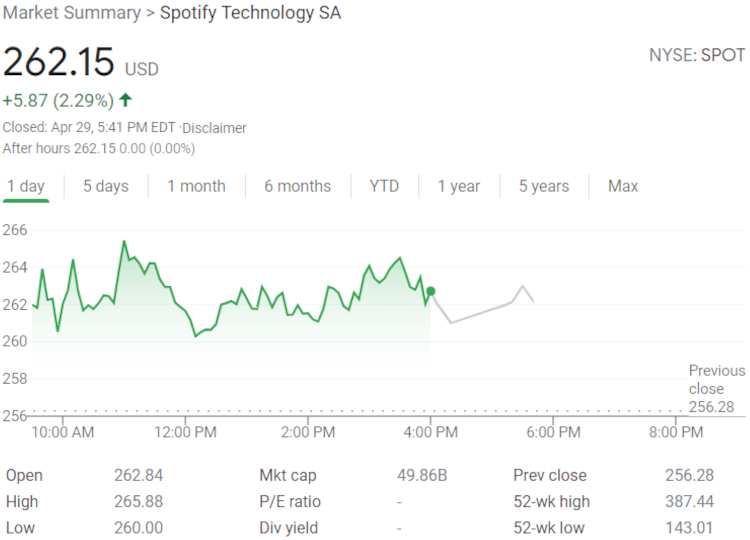 The initially mentioned stock-price falloff arrived almost immediately after the market opened yesterday, when the music-streaming giant revealed its performance specifics for the first three months of 2021. By 10 AM EST, SPOT had dropped from almost $293 to approximately $263, before ending the day at $256.28.

The latter price, while roughly in line with SPOT’s value one month ago, is $131.16 less than Spotify stock’s 52-week high, $387.44, which arrived in February of 2021. Moreover, in spite of the significant valuation decrease that the stock sustained this week, today’s closing worth is still about $110 per share greater than in late April of 2020, when SPOT was trading for roughly $152.

As an aside, Spotify stock’s upward ascent appeared to kick off on May 19th of last year, when the platform announced that it would become the exclusive home of The Joe Rogan Experience. By May’s end, SPOT had climbed past $180, before cracking $270 at July’s start. And though the program became available solely on Spotify in December of 2020, podcast engagement – not necessarily start-to-finish listenership – has remained essentially flat, at only 25 percent.

This statistic (reported in the company’s newest earnings breakdown) may have contributed to the stock-price dip, as Spotify has invested heavily in podcasting, and multiple financial professionals have touted the perceived income potential of podcasts when setting bullish SPOT target prices.

To be sure, besides paying a reported $100 million for the rights to JRE, Spotify has secured exclusive podcasts from Kim Kardashian West, Addison Rae, Bruce Springsteen and Barack Obama, and others.

In addition to these undoubtedly expensive projects, Spotify reportedly paid $230 million for Gimlet Media in 2019, a quarter of a billion dollars for The Ringer last year, and $235 million for podcast advertising and publishing platform Megaphone in November of 2020.

Spotify added three million paid subscribers during the initial three months of this year (compared to 11 million in Q4 2020), and predictably, premium revenues increased by just two percent from the prior quarter, to $2.34 billion (€1.93 billion). Ad-supported earnings, while 46 percent greater than in Q1 of 2020, fell by 23 percent quarter over quarter.

Today, Spotify CEO Daniel Ek stated that he’s “very serious” about placing a bid for the Arsenal Football Club, and Facebook this week launched the Spotify “miniplayer” in 27 countries.