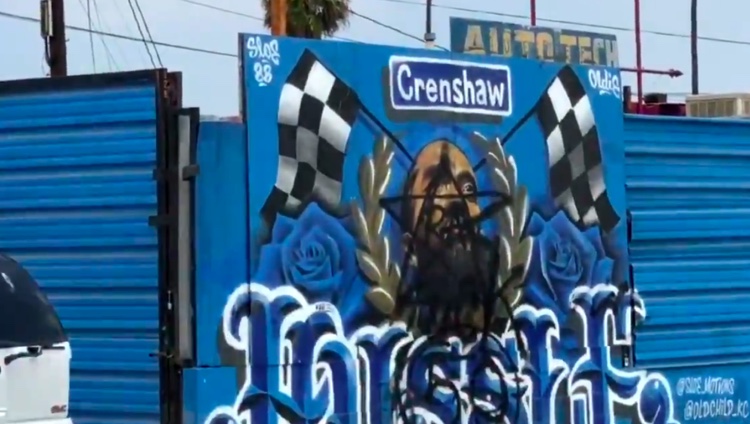 A prominent mural devoted to the late Nipsey Hussle was defaced last night in South Los Angeles — then defaced again after a local artist attempted to repair it.

Update (July 11th, 2021): Since the publication of this article, gang-related defacements of multiple Nipsey Hussle memorials have continued. That has spilled over into violence. Over the weekend, rapper Indian Red Boy (real name Zerail Dijon Rivera) was shot multiple times at close range while parked in the Hawthorne neighborhood of Los Angeles. The shooting was captured in this extremely graphic Instagram Live video. Indian Red Boy, a Blood, was reportedly targeted after repeatedly defacing at least one Nipsey Hussle mural (Nipsey was a member of the Rollin 60s Crips).

The Nipsey Hussle mural (pictured above) is situated near the busy intersection of Slauson and Crenshaw Blvds. in the heart of South Los Angeles — right next to the spot where the rapper was killed in 2019. At this point, it’s unclear why the mural was defaced, though at least one arrest has been made according to the Los Angeles Police Department. Additionally, the LAPD towed away a suspicious vehicle parked near the scene of the crime.

The mural itself was actually defaced twice. After the first vandalization was repaired by a local artist, the mural was then quickly defaced again. It’s likely that the same person is responsible for both vandalizations, though there’s little information currently on the suspect. It’s also unclear if other people were involved in the defacement.

Sadly, this isn’t the first time that a Nipsey Hussle mural has been attacked. Just recently, a woman in Hartford, Connecticut brazenly defaced a Hussle memorial, though it’s unclear if the vandalization was tied to any issues with the slain rapper. The mural was quickly restored by community artists. There are currently multiple Nipsey Hussle murals peppered throughout cities in the United States.

Back in Los Angeles, the defacement could be gang related, and the specific markings over Nipsey Hussle’s face suggest a targeted message of disrespect.

Separately, a mural featuring both Nipsey Hussle and Kobe Bryant has drawn controversy in the nearby LA neighborhood of Downey. The reasons of the complaints aren’t clear, though Downey officials clarified that there are no plans to remove the artwork. “There are no plans to have the mural removed,” a Downey official relayed, while confirming that multiple complaints were made about the memorial.

Nipsey, whose real name is Ermias Joseph Asghedom, was gunned down outside of his Marathon Clothing Store on March 31st of 2019. His killer, Eric Holder, remains imprisoned but has reportedly refused to testify in court or attend hearings. Holder, who was recorded killing Nipsey Hussle in broad daylight on a surveillance camera, was arrested for murder, attempted murder, assault with a firearm, and possession of a firearm by a felon.

Holder has been held for more than two years on a $6.5 million bail, an amount that the assailant has unsuccessfully attempted to reduce.