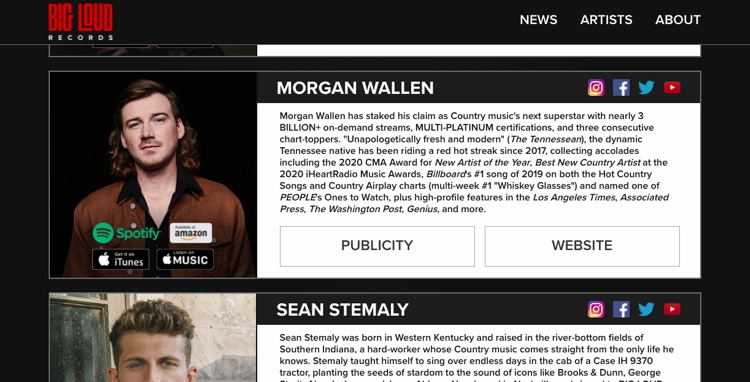 Big Loud/Republic has now lifted its suspension of Morgan Wallen, according to a quiet reinstatement issued this morning (May 18th).

Last week, we first reported that Morgan Wallen wasn’t getting dropped by his record label Big Loud, which is partnered with major label Republic Records/Universal Music Group. Now, Wallen has officially been reinstated by Big Loud after a suspension that lasted nearly four months.

In early February, Big Loud officially suspended Wallen after he was filmed uttering the n-word outside of his residence in Nashville. Others promptly canceled the artist, including Spotify, Apple Music, Pandora, SiriusXM, Willam Morris Endeavor, the Academy of Country Music, and nearly every country radio station in America. That would be enough to kill most careers, though the cancellation only served to increase Wallen’s popularity and sparked the beginning of a record-setting album sales streak.

Outside of album sales, Wallen’s fanbase has been making plenty of noise following the mass-cancellation. Multiple broadcast radio stations reported receiving angry calls from Wallen fans, most of whom threatened to ditch stations that dropped Wallen from their playlists. Separately, Wallen fans have been protesting the singer’s exclusion from the ACM Awards and Billboard Music Awards by putting up massive billboards in both Nashville and Los Angeles just prior to the events.

Shortly after the announcement, a dedicated feature page for Wallen’s Dangerous: The Double Album appeared on Spotify, which strongly suggested involvement by Big Loud staffers. It’s also likely that Big Loud continued to manage backend tasks for Wallen, including royalty accounting and consultations with the artist.

Now, all of that returns to being above board, though it’s unclear if Republic Records and its parent, Universal Music Group, are ready to make similar moves. At present, Republic still maintains an artist page for Wallen, though the singer remains missing from Republic’s artist roster list.

Whether others follow suit and ‘un-cancel’ Morgan Wallen also remains unclear, though Big Loud could trigger a domino effect.

Several days ago, SiriusXM-owned Pandora lifted its ban on Morgan Wallen, potentially in response to attrition by country music fans. That follows a softened stance by Spotify, which reintegrated Wallen into a number of country playlists, but stopped short of reintegrating Wallen into its marquee Hot Country playlist, which boasts millions of followers.

Others are still unready or unwilling to relax their Wallen bans. That includes most major broadcast radio stations, which are controlled by a small cabal of corporate parents. SiriusXM is also on the sidelines with its satellite radio stations, and William Morris Endeavor has likely severed its touring agency relationship with the artist permanently.