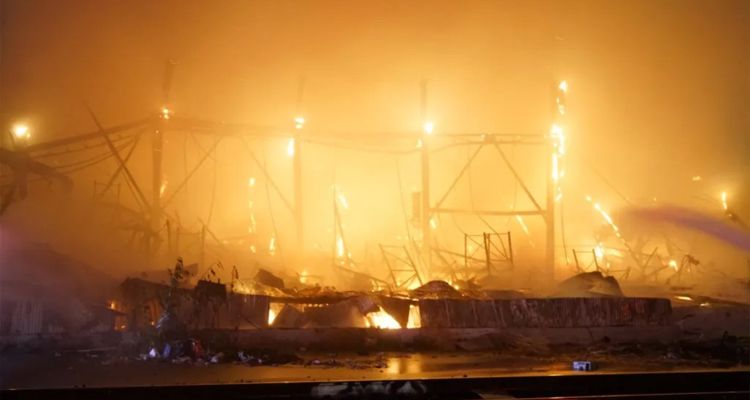 Prices for music gear like amps, pedals, and other gear may spike after an LA warehouse fire.

The warehouse belonging to Boutique Amps Distribution went up in flames Tuesday morning. The LA County Fire Department posted a picture of the fire as they worked to combat it. They described the warehouse fire as needing a “defensive fire attack” to combat “heavy smoke and fire.”

Boutique Amps Distribution is the exclusive worldwide distributor for a number of guitar amps and effects products. Those include brands like Wampler, Soldano, Egnator, Diezel, Matthews Effects, Tone King, Bogner, and Morgan. The LA warehouse was being used as both a manufacturing and storage facility. There is no official word on the extent of stock losses yet – but the 200′ x 200′ warehouse is mostly gone.

Responding to news of the fire on Instagram, Joe Morgan of Morgan Amps confirmed the incident. He says no one else was injured aside from a minor incident with a firefighter on the scene. “I am not sure how much damage was done to the manufacturing side of the shop, but hopefully, we will have a better understanding of the damage today.”

Boutique Amps Distribution has yet to make an official statement about its LA warehouse fire.

While we don’t have any official estimates of the damage, reports seem to rest on ‘extensive.’ That means the price and availability of these brands may rise steeply in the future – especially if manufacturing is affected.

The Summer NAMM event is right around the corner, with many of these manufacturers would typically attend. Often new product lines and features are unveiled at NAMM, so this trade show could be impacted by the fire inadvertently.

Dave Friedman of Friedman Amps has also reached out on Instagram to keep the situation updated.

“The building was completely empty, and it’s with extreme gratitude that we are able to say no bodily injury of any kind occurred as a result of the fire,” Friedman writes.

“Unfortunately, we don’t know all the facts as to the extent of the damage and are not able to provide a lot of information at this time. The part of the building that was most affected by the blaze was a tenant-occuped area that did not house any portion of Boutique Amps, and we’re absolutely heartbroken for everyone who was affected by that damage.”

“Once again, we can’t say and won’t speculate on any specifics at the moment, but as you can imagine, there is at least some loss to the Boutique Amps building and its contents due to exposure to smoke and water.”