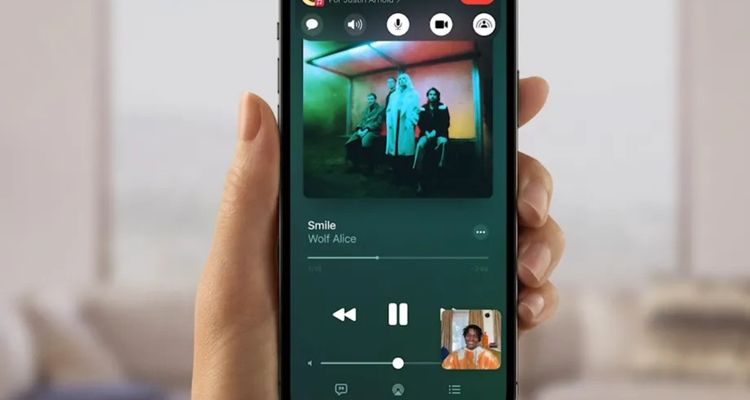 Apple is bringing video and music sharing to FaceTime in a new feature called SharePlay.

People will be able to watch or listen to content over FaceTime with everyone in the call. It works by casting the content to an Apple TV device or using a picture-in-picture function on iOS devices. SharePlay uses Apple Music integration to allow people to queue up a multi-track playlist for the call collaboratively. There’s also a skip button if someone gets a little too carried away with their choices.

While SharePlay sports Apple Music integration, it also has an API for third-party access. There are several partners on board at launch, including:

Noticeably absent from the list is Netflix, Spotify, or any other music streaming service. Amazon Video is also absent, though Amazon-owned Twitch makes the list. Apple says you’ll be able to watch videos and content together, but it seems as though the FaceTime music support is limited to Apple Music integration for now.

“This will give friends and family another way to come together to share the incredible stories that we deliver through our content, including bringing a live sports co-viewing experience to ESPN+ for the first time,” notes Jerrell Jimerson, EVP of Product Design at Disney Streaming.

So how does SharePlay work?

It seems that everyone who participates in the call will need access to the subscription service to watch. For example, if you want to watch a documentary on Netflix with your grandma in Phoenix, she needs a Netflix subscription too. The ability to share content collaboratively still requires subscription access, Apple notes.

With SharePlay, the Apple TV box now has a new row called ‘Shared With You’ where media will appear. Apple is embracing virtual watch parties by building them directly into FaceTime. Other services that have experimented with the feature include Disney+, Hulu, Amazon Prime Video, and Sling TV.

SharePlay is not available yet; it will debut as part of iOS 15 later in the fall. Expect the feature to become an integral part of the FaceTime experience, especially for frequent travelers. SharePlay will also include a screen sharing function so that users can browse the same website together.

It’s interesting to see Apple has so many video partners on board at launch. Spotify is actively engaged in an antitrust battle against Apple. But Apple’s API access for SharePlay could help other music services support the feature down the line. For now, music streaming via FaceTime is limited to Apple Music.