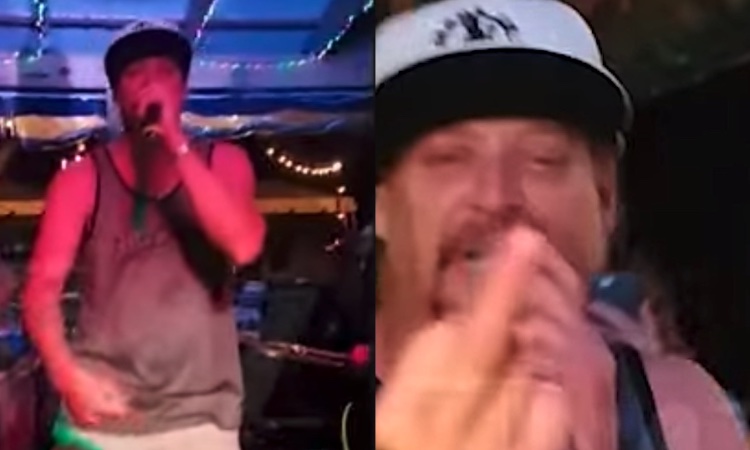 Kid Rock dropped a homophobic slur during a live show in Tennessee over the weekend — and didn’t seem too apologetic about it.

The slur was actually filmed by the person Kid Rock was ranting against, specifically for filming his performance on an iPhone. As revealed by — you guessed it — TMZ, the clip starts with Kid Rock railing against the attendee before calling him a ‘f—king f—got’ while grabbing his crotch.

The rant occurred at the FishLipz Bar & Grill in Smithville, Tennessee, which apparently had a no-smartphone filming policy (at least for that show). It’s unclear if that policy was being imposed by FishLipz Bar, Kid Rock, or both, though the blatant violation occurred just steps off the stage and led to the outburst.

Recognizing the juicy footage (that was later sent to TMZ), the person continued to film. Which of course led to more juicy footage.  “You f—king f—gots with your iPhones out!” Ritchie continued. The episode sounds like classic Kid Rock, though the timing couldn’t be worse, occurring just one week into LGBT Pride Month. Whether Rock was aware of that celebration is unclear, though festivities and pride flags have been going full steam for at least a week.

Of course, this isn’t the first outburst from Ritchie, though it’s unclear if there will be ramifications this time around.

Back in 2019, the singer had some choice insults for Oprah Winfrey and Joy Behar during an extremely drunken performance at his Big Ass Honky Tonk Rock N’ Roll Steakhouse. The comments, which were profanity-laced and graphically sexual in nature, led to a massive backlash, including a public rebuke from the Michigan National Action Network. Kid Rock eventually shut down his Made In Detroit restaurant under heavy pressure.

For Ritchie, the latest incident also appears to be part of an ongoing tirade against political correctness. Back in 2015, the singer questioned why the using the word ‘gay’ in a derogatory sense was suddenly off-limits. “If someone says you can’t say ‘gay’ like that you can tell them to go f–k themselves,” Rock defiantly told The Guardian.