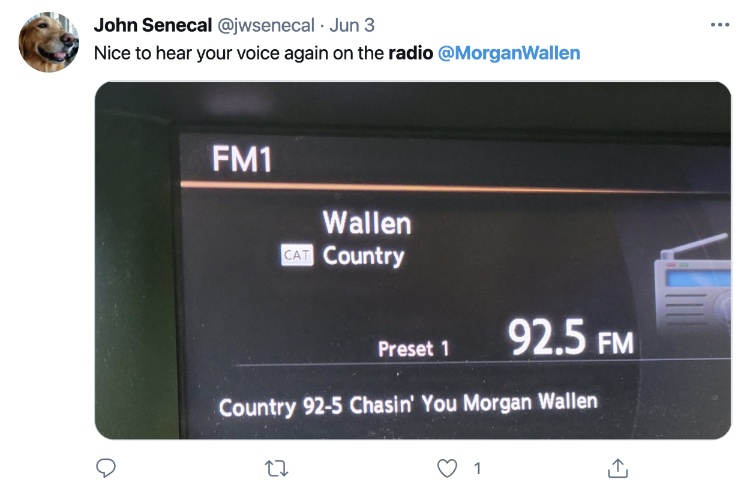 Morgan Wallen is now being reinstated by major radio conglomerates who banned him back in February.

Last month, we first reported that Pandora had quietly reinstated Morgan Wallen into their customized online radio stations. Now, less than four months after banning the artist from their broadcasts, major radio conglomerates are following suit. According to multiple tips from both industry sources and fans, Morgan Wallen is now being reintegrated into country radio playlists nationwide, with potentially hundreds of stations lifting their bans this week.

That includes some seriously-large stations, including KPLX 99.5 ‘The Wolf’ in Dallas-Ft. Worth, TX (owned by Cumulus Media), WSIX ‘The Big 98’ in Nashville (owned by iHeartMedia), KKBQ ‘The New 93Q’ in Pasadena, TX (owned by Cox Media Group), and KUPL ‘98.7 The Bull’ in Portland, OR (owned by Alpha Media).

We’ve also received reports of Wallen finding his way back onto stations owned by Beasley Broadcasting Group and Audacy (formerly Entercom Communications), but could not confirm specific stations by press time.

An in-dash screengrab of Morgan Wallen recently being played on Big98 in Nashville, an iHeartMedia country radio station.

It’s also worth noting that Cumulus Media — which was the first to ban Wallen back in February — has been quietly reinstating the singer since March. By mid-March, roughly 45 days after Wallen was publicly yanked by the radio station conglomerate, songs from the singer popped up on member stations 92.3 KRST in Albuquerque, NM and 105.5 WYTM in Fayetteville, TN. It’s unclear if those reinstatements were approved by Cumulus higher-ups, or were merely program directors breaking ranks.

The list of stations re-adding Wallen is certainly substantial — though again, it’s too early to get a full count. But based on the early list, it appears that iHeartMedia is unilaterally lifting its ban. As of this evening, a long list of iHeartRadio stations are actively playing Wallen’s music, including WIKX ‘Kix 92.9’ in Charlotte Harbor, FL; K102 in Minneapolis; 99.5 WGAR in Cleveland, OH; US103.5 in Tampa, FL;  Country 92.5 in Connecticut; and 101.7 ‘The Bull’ in Boston.

A number of smaller, independent radio stations reinstated Wallen months ago. That includes Knoxville, TN-based 96.7 Merle FM, which placed Wallen back into heavy rotation after learning that 92% of listeners voted to reinstate the country artist. And a smattering of smaller country radio stations refused to remove Wallen in the first place. But the sharp reversals by conglomerates like iHeartMedia means that a dramatically larger number of stations are back on board.

And make no mistake: these radio conglomerates moved quickly and decisively to remove Wallen after the singer was filmed uttering the n-word outside of his home in early February.

In a companywide email leaked on February 3rd, Cumulus Media informed all member stations that Wallen was to be removed “without exception”. The email, whose title was marked ‘EXTREMELY IMPORTANT,’ stated in part: “Unfortunately, country music star Morgan Wallen was captured on video Sunday evening using a racial slur. Effective immediately, we request that all of Morgan Wallen’s music be removed from our playlists without exception. More to follow.”

Beyond that email, Cumulus did not offer any public statements on the matter. But other conglomerates issued clear statements declaring that Wallen was being quickly scrubbed from their stations. That was regarded as a potential death blow to Wallen’s career, based on the serious influence that country radio stations still wield.

But instead of crushing an artist, removing Wallen exposed just how much competition exists for listeners. And Wallen quickly prevailed: shortly after the ban, streams of Morgan Wallen songs surged on Spotify, Apple Music, and other online platforms, despite efforts to remove the country singer from marquee playlists. Even Pandora was forced to relent, most likely to stem an exodus of angry country fans.