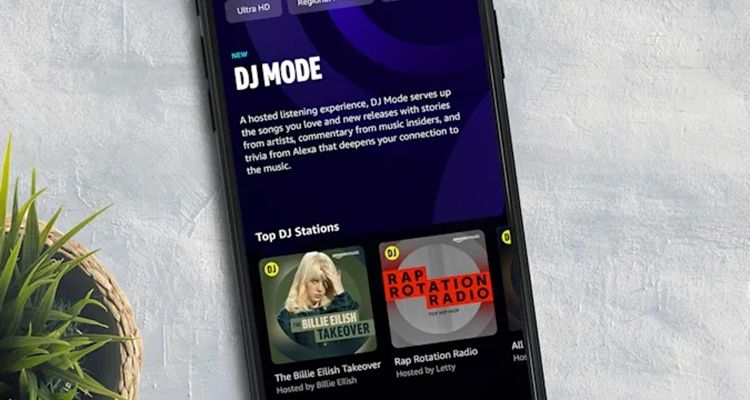 Amazon Music is getting a new DJ mode to bring the feel of live radio to music streaming.

Amazon says its new DJ mode listening experience will serve up personalized hosted stations with top DJs. It is a service that is intended to compete directly with Apple Music’s radio stations, like Apple Music One. Amazon says music lovers will be able to tune-in whenever to hear DJ-curated music, artist interviews, and feature insights from music experts.

The first artist-led DJ mode will be hosted by Billie Eilish. Eilish will introduce her favorite songs with their stories from her new album, Happier Than Ever. Listeners in the United States can now tune in for DJ-hosted hip-hop, country, and pop music stations. The service is bundled as part of Amazon Music Unlimited, which costs $7.99/ month for Prime members.

Apple started its foray into radio streaming back in 2015 with the launch of the Beats 1 station. But after the Beats rebranding, Apple Music 1 emerged. Apple also has Apple Music Hits, and Apple Music Country.

Many people find listening to an algorithmic-curated playlist boring. It’s one reason why SiriusXM’s DJ-hosted channels are appealing to older generations who expect human curation of their favorite music. But SiriusXM is working hard to attract younger generations to DJ-hosted radio, too.

This summer, SiriusXM is launching TikTok Radio. It’s a full-time music channel featuring the trending sounds that are defining pop culture on TikTok. TikTok Radio is presented by TikTok creators, tastemakers, and DJs. It is available in vehicles and as a streaming channel on the SiriusXM desktop app.

As part of that partnership, Pandora also launched a serious of hosted playlists featuring popular TikTok creators. The creators curate, host, and promote the playlists to their fans on TikTok, generating more views from the platform.

Both Amazon and SiriusXM are trying to add the human touch with DJ mode and human curation.

Spotify’s radio mode is pretty lacking, especially if you rely on its algorithms. Turning on radio mode to discover new music usually results in the same songs looping over and over. Playlist radio feels shallow and soulless, especially when you’re used to hand-selected songs for a specific mood.

Spotify has offered human-curated playlists in the past, but it has stopped short of providing a DJ mode. Perhaps Amazon embracing the feature will bring Spotify out of its heavy reliance on machine learning to build its playlists.