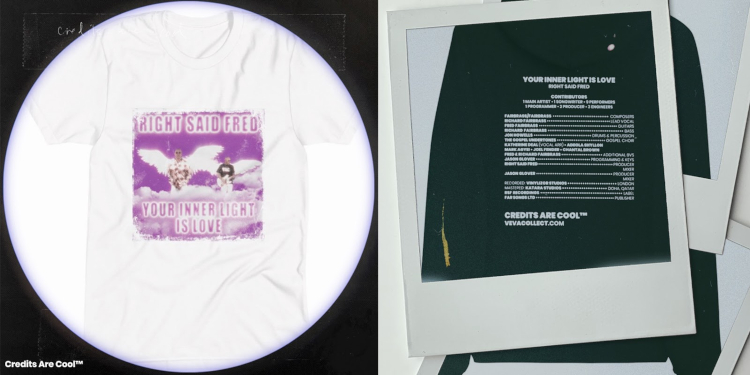 VEVA Sound has long stressed the key role that metadata and credits play in the streaming-driven music landscape. Now, to raise awareness of crediting’s significance while helping artists unlock a new revenue stream, the creators of VEVA Collect have launched a campaign entitled “Credits Are Cool.”

For many, it’s nostalgic to recount reading an LP’s liner notes or sliding out a CD’s eight-page jewel case insert to learn everything about how, and by whom, an album was made. In the digital world, how do you recapture this glimpse into the collaborative nature of the music industry?

Fans of Taylor Swift’s “Look What You Made Me Do” may be interested to know that it was co-written by Fred and Richard Fairbrass – better known as Right Said Fred, who famously wrote and released “I’m Too Sexy” in 1992. And Roger Taylor, an original member of and drummer for Queen, produced, engineered, and performed on Nashville-based singer-songwriter Sonia Leigh’s “1978 December,” which released on the 2011 studio album of the same name.

The team at VEVA, who build products like VEVA Collect with creators top of mind, believe that this insight into a song’s beginning is cool enough to engage fans in the real world. To test the theory and underscore credits’ inherent value, they’ve debuted the Credits Are Cool campaign. Company higher-ups are currently partnering with independent artists and writers on the effort, which involves creating custom, limited-edition t-shirts and hoodies featuring songs’ artwork and credits.

Artists can choose their merch’s song and donate a portion (or all) of the revenue to charity, with VEVA Sound handling the full-color apparel’s manufacturing, processing orders, and delivering the items to customers. Participants only pay a portion of the gear’s sale price to VEVA, without having to worry about upfront costs or financial risk.

Acts including Right Said Fred, Sam Tinnesz, Wendy Moten, Sonia Leigh, Hailey Steele, and Tayla Lynn (granddaughter of country music legend Loretta Lynn) have already made custom products available to fans through Credits Are Cool, and as mentioned, VEVA intends to partner with other acts throughout 2021’s second half.

“The industry talks a lot about credits: why they’re important and how they’re useful. But we think it’s cool to know more about a song than the main artist. If you’re a fan of a song, it’s cool to know who made the beat or who played guitar – and our role at VEVA is to provide cool solutions to these creators so that their work can be seen, heard, and paid for,” said Deborah Fairchild, president of VEVA Sound.

Since the campaign’s launch last week, the team’s theory seems to have been proven correct – credits are cool enough to engage an artist’s fan base and create new revenue. Customers from around the world have ordered the merch.

Beyond direct fan engagement, another goal of the campaign is to raise awareness of credits’ value to individual creators’ careers and wallets. In one of several noteworthy examples of the pitfalls associated with subpar (or missing) credits, the AFM & SAG-AFTRA Fund last year agreed to distribute $46 million in unpaid royalties to background vocalists and session musicians. Similarly, the Mechanical Licensing Collective ingested a staggering $424 million worth of unpaid DSP royalties in February of this year.

And despite the massive sums involved, these and other unpaid-royalty tranches consist of many modest payments that failed to make their way to hardworking creators. Songwriters, background vocalists, session musicians, producers, engineers, and different professionals yet who have a hand in artists’ hit songs – as well as their broader career successes – are missing out on the recognition and the compensation that they’re due.

In short, a comprehensive awareness of crediting will assure that contributors (an estimated 95 percent of whom are uncredited on at least one project) secure the financial and professional benefits that their work entitles them to – particularly because easily verifiable credits are the foundation upon which effective resumes are built.

As demonstrated by the previously noted $500 million or so worth of unpaid songwriter, background vocalist, and session musician royalties, the contemporary music industry’s crediting troubles are considerable.

And while the problem’s scope precludes the implementation of an overnight solution, worthwhile technologies from companies like VEVA have the potential to make crediting oversights (and the related missing payments and professional recognition) issues of the past.

For now, it’s a matter of raising awareness through campaigns like Credits Are Cool so that the creators and behind-the-scenes experts of tomorrow can spend less time tracking down royalties and more time doing what they love.

Merch for Credits Are Cool, a registered trademark of VEVA Sound, is available at shopvevacollect.com.