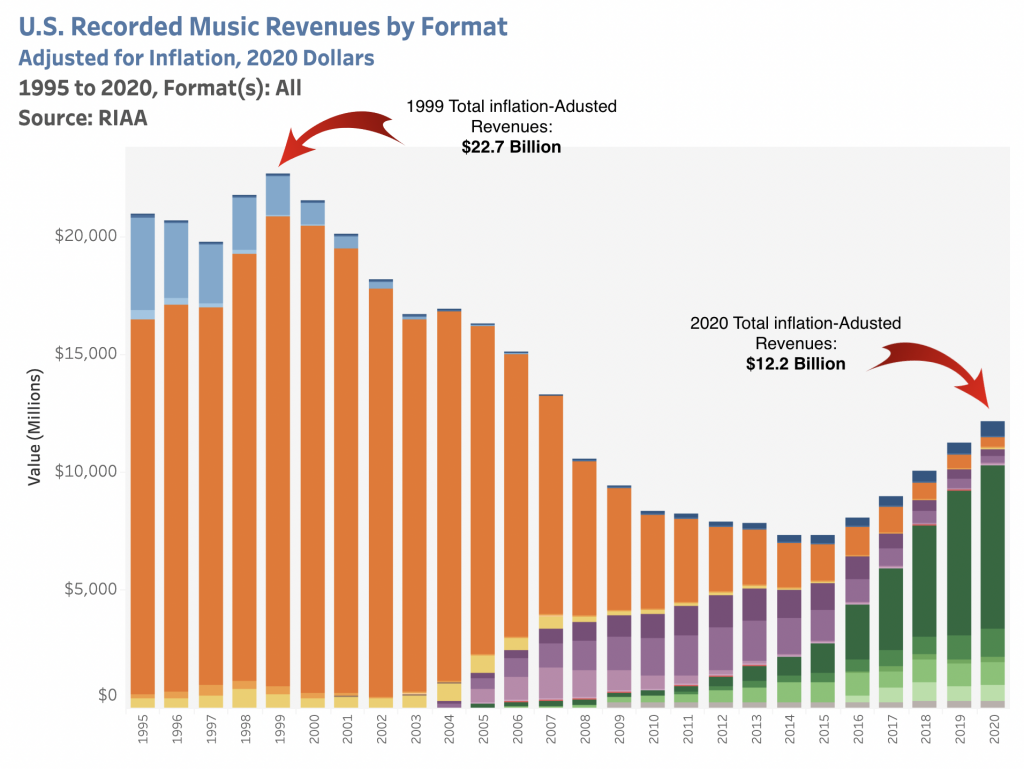 Did Spotify and music streaming really save the music industry? Not according to inflation-adjusted recorded music revenue data.

According to inflation-adjusted data from the Recording Industry Association of American (RIAA), total recorded music revenues in 2020 were $12.2 billion, which is approximately 46.2% lower than the industry’s 1999 peak-year total of $22.7 billion.

That strongly challenges assumptions that the music industry has already completed its return to glory. Instead, the latest data — which is, importantly, inflation-adjusted — tells an entirely different story. While U.S. recorded music revenues are certainly ramping upward from sub-$10 billion lows experienced just five years ago, they are nowhere near the robust revenues witnessed in the mid-1990s and early-2000s.

Of course, there’s more to the music industry than just recordings. For example, streaming platforms like Spotify and social media platforms like Facebook are widely credited with sparking a live concert boom, with billions in excess profits for mega-players like Live Nation. But with 2020 concerts shut down by the pandemic, the focus has abruptly shifted back to revenue problems surrounding recordings.

Instead of a secondary revenue source, recordings were once an industry breadwinner — and the starting point for the broader music business ecosystem that includes live concerts, publishing, merchandising, and other industry revenue generators.

That was a different era, and industries naturally change. But the sudden refocus on recorded music revenues includes depressingly-low streaming royalties for artists. Digital Music News’ heavily-cited data finds that Spotify’s per-stream royalty payouts fall roughly between $.003 and $.005 (one-third of a penny to one-half of a penny), a figure that appears to be slipping southward.

Spotify routinely blames that on major labels while reporting billions in total payouts, and labels themselves are notoriously quiet on the matter. But the net-net for artists is that streaming platforms like Spotify don’t pay the bills, despite being heralded as music industry saviors.

The lukewarm ‘comeback’ of recorded music also appears to be having a dramatic impact on publishing IP. Over the past year, a speculative IP boom has caused the valuation of storied catalogs to surge, with players like Hipgnosis making highly-leveraged bets. That has resulted in some massive payouts for artists and songwriters, though sadly, some of those deals are being motivated by the collapse of touring and the relatively paltry recording revenues that remain.

One poster child for that turn-of-events is David Crosby, who flatly admitted that an inability to perform live was squeezing his finances. “Given our current inability to work live, this deal is a blessing for me and my family, and I do believe these are the best people to do it with,” Crosby noted after inking a massive publishing sale to Irving Azoff’s Iconic Artists Group (IAG).

Of course, this isn’t a static system, and streaming revenues — and most importantly, paid streaming music subscriptions — still have room to grow. But if Spotify’s recent subscription slowdown is an indication of future growth trajectories, it may be more difficult to match earlier, 1990s-era revenue highs.

During Spotify’s most recent financial quarter, which ended in March of this year, monthly average users (MAUs) totaled 356 million, up 11 million from 345 million in Q4 2020. But Spotify’s paid-user total increased by just three million, to 158 million.

For reference, Spotify added 25 million MAUs during the fourth quarter of 2020, including 11 million paid subscribers. Year-over-year, Spotify clocked a substantial 21 percent hike over the same quarter in 2020, though it’s unclear if that sharp trajectory will continue.