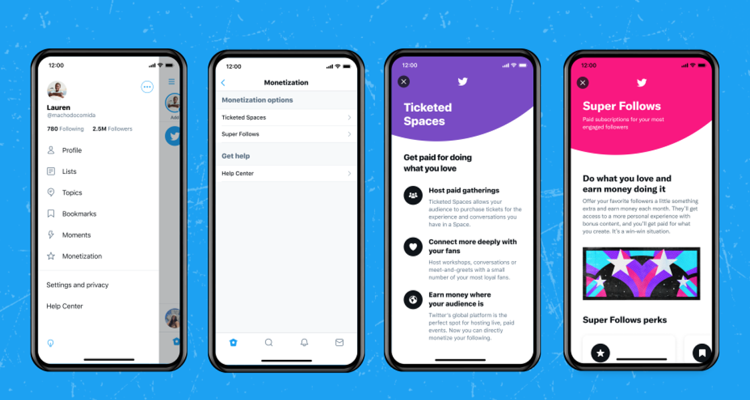 Twitter Ticketed Spaces is a new monetization feature for its live audio rooms.

Twitter is working hard to make its Spaces feel different from Clubhouse or Facebook Live Audio Rooms. The company has begun rolling out Super Follows and Ticketed Spaces to users. Both features allow content creators to monetize their Twitter presence.

Super Follows generate monthly revenue for creators (and Twitter) by allowing users to subscribe to a feed for $2.99, $4.99, or $9.99 per month. Only users who are over the age of 18 and have at least 10,000 followers can enable the new super follows feature.

Twitter says it only plans to take 3% of creators’ revenue after in-app purchase fees. But that’s on top of the 30% already charged by Apple and Google. Twitter also ups their cut after you’ve generated plenty of revenue with the service.

Once users exceed $50,000 lifetime earnings on Twitter, the app will take 20% of all future earnings after fees. That’s a jump from 33% to 50% of revenue taken before it enters the creators pocket. Compare that to something like Patreon, which only takes 5% to 12% of a creator’s earnings, with no concern about in-app purchases.

Most creators have a Patreon their audience is familiar with and may not be willing to switch to a less lucrative service. That’s especially true when the earning ratio is skewed in Twitter’s favor for long-time content generators.

Anyone eligible to create a Ticketed Space can set their ticket price between $1 and $999. Creators also control how many tickets can be sold, which might justify that near $1k price tag for a one-on-one meeting. Ticketed Spaces attendees are notified of the event through in-app notifications.

Anyone on Twitter over the age of 18 with at least 1,000 followers and three hosted Spaces can apply. Access to Ticketed Spaces is limited for now, so everyone will need to apply. Twitter is facing competition from Facebook, which has implemented something similar in its recently launched Facebook Live Audio Rooms.

Clubhouse has features that allow the audience to tip speakers, but it redirects to outside sources. The apps don’t yet allow for something like advance ticket sales, which Twitter Ticketed Spaces handles. Both Clubhouse and Spotify Greenroom are hoping to keep creators interested by paying them directly through their respective Creator Funds.