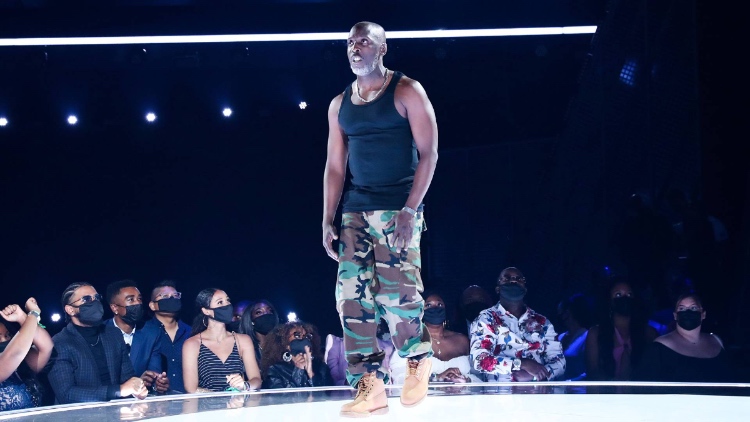 Michael K. Williams offers a stunning tribute to the late rapper DMX during the 2021 BET Awards, which aired earlier this week (photo: BET)

Despite a cavalcade of superstars and the return of a live audience, the BET Awards couldn’t escape the viewership problems plaguing awards shows. According to audience data shared today by the network and producer Jesse Collins Entertainment, the 2021 BET Awards simulcast reached 2.4 million total viewers, down substantially from last year’s 3.7 million. That’s an all-time low since the iconic awards show started back in 2001.

The lackluster showing follows similarly problematic ratings from other awards show staples, including the Academy Awards (i.e., the Oscars), the Grammy Awards, and the American Music Awards (AMAs), all of which hit ratings nadirs in 2021. Now, the BET Awards becomes the latest awards show to post all-time lows, raising more questions about the once-reliable awards format.

In terms of the viewership breakdown, the BET gala attracted 2.4 million viewers across various ViacomCBS channels, specifically BET, BET Her, MTV, MTV2, Logo, TV Land, and VH1. BET’s flagship station attracted 1.7 million viewers for the show itself, though the channel also flanked its annual event with lead-up programs like ‘The Countdown to BET Awards’. In total, the network posted 4.6 million viewers across all BET Awards-related shows, while leading the critical 18-49 demographic.

The lackluster result wasn’t for lack of talent.

In other words, this was a dazzling cast for anyone that loves music — though the talent-heavy cast raises even more questions on why audience numbers weren’t higher. Last year, the pandemic ushered in some shocking drops in awards show viewership figures, a problem also experienced by major sporting leagues like the NFL and NBA. But it’s still not entirely clear why audience numbers are dropping so much.

One explanation is that awards shows — and sporting events, for that matter — simply lacked sizzle during the pandemic without live crowds. But fully-packed shows like the BET Awards didn’t bring back ratings, strongly challenging that hypothesis.

Another theory is that the awards show format itself is getting stale for modern-day audiences. In the case of the Oscars, long-winded speeches and endless back-slapping did little to excite viewers, especially given the thousands of other media options available on multiple screens. Similarly, the Grammys are also feeling a bit dated with endless speeches and on-stage performances.

The story also includes a shift towards social media, which is more difficult to capture and monetize. On that front, the BET Awards drew 10.2 million social interactions, an 83% year-over-year bump (and 64% climb from 2019), according to BET. #BETAwards was also the top-trending hashtag on Twitter for 5 straight hours. But that excitement didn’t translate into traditional ratings gains.