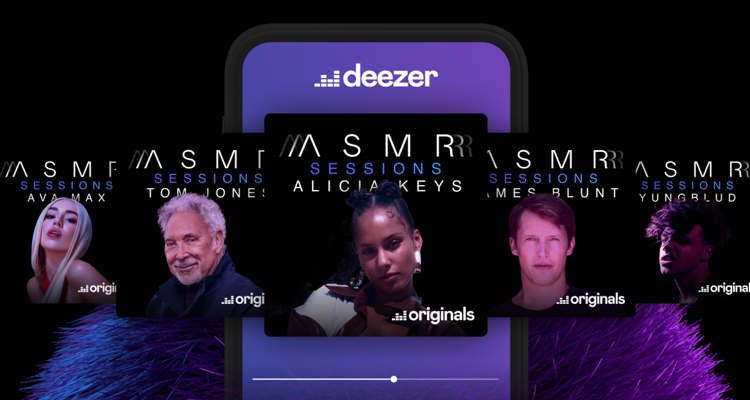 Deezer is launching an ASMR channel with original whispered songs for those who ‘get’ ASMR.

Deezer has tapped stars like Alicia Keys, Tom Jones, Ava Max, James Blunt, and YUNGBLUD. Each artist transforms one of their songs into an ‘ASMR Session’ into a never-before-heard track. Deezer says this marks the first time anyone has paid global artists to perform their music in ASMR format.

ASMR is an acronym that stands for autonomous sensory meridian response. It’s a phenomenon described by millions on the internet as a tingling sensation that starts at the crown of the head and sends tingles down the spine. A variety of sounds can trigger ASMR, which has led to a huge ASMR sound community on YouTube.

Deezer hopes to attract some of that community that turns to YouTube each night to help them sleep. Many people who can feel ASMR grow tolerant of the videos that trigger the response – they must seek out new videos that create the response when that happens.

The Deezer ASMR channel includes several playlists of common stimuli. But it also features five original songs performed by the original artist to help invoke the feeling of ASMR.

Each of these hits has something different about it that helps invoke that feeling of ASMR. Alicia Keys delivers a breathy rendition of “Fallin’,” while James Blunt whispers his song with nature in the background. Deezer says it wants to give users the content that helps them create that head-tingling feeling so many of them crave.

“ASMR content is becoming increasingly mainstream and Deezer has seen consumption of it increase by 248% worldwide since the start of 2020,” the music streaming service told Digital Music News. “ASMR Sessions give fans a new unexpected twist on the genre, featuring some of the world’s biggest artists bringing their lyrics to life with an intensity you’ve never heard before,” says Nigel Harding, Deezer’s VP of Global Artist Marketing.

The immersive experience places everything from the track, including individual noises like whispering, tapping, and breathing, in different positions inside a virtual 360 spherical audio space. After a survey of 12,000 people, Deezer says that 63% said they engage with ASMR content of some variety. 61% of those do so once a week or more often.