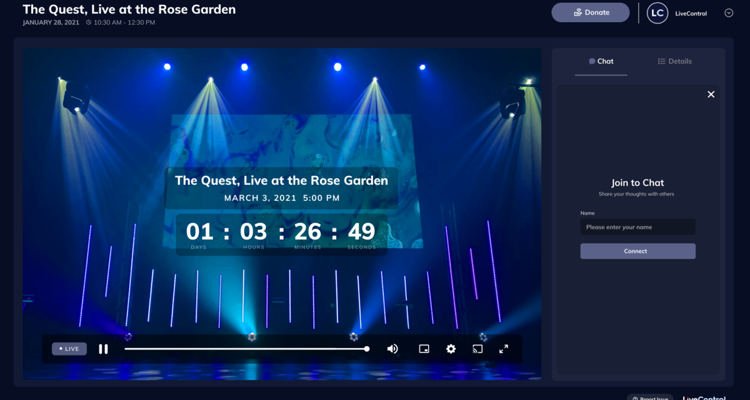 LiveControl has raised $30 million in Series A funding to bring venues plug and play livestreams.

After the pandemic, live venues have been left scrambling to find new revenue streams. Many venues aren’t opening at full capacity yet, which puts a hamper on their revenues. It can even lead to some music venues shutting down for good. That’s what LiveControl hopes to fix by offering a ‘plug and play’ production suite for livestreams.

The Series A funding round was led by Coatue and featured existing investors like First Round Capital, Box Group, Susa Ventures, and TriplePoint. The funding round brings LiveControl’s total funding to $33 million, following a $3.2 million seed fund last year.

“What if you could snap your fingers an an entire video product crew would appear, for $150?” asks CEO Patrick Coyne. That’s how he describes LiveControl to venues who are looking for additional revenue streams for their events. LiveControl says its technology has been deployed at dozens of locations across the United States.

“Video is now table stakes for most organizers, venues, and creators,” Coyne continues. “We’re only seeing it accelerate, and everyone is forward leaning to make bigger investments to improve their video quality.” LiveControl’s latest funding round will go toward accelerating its technology and expanding employee headcount.

The question remains whether virtual streams of live events will remain popular after the pandemic. Many people are eager to begin attending live music events in the future, even with COVID-19 restrictions in place. Venues like the Monterey Jazz Festival are selling out with smaller crowds.

Touring can be a carbon-intensive process that has left many artists looking for viable alternatives. Livestreaming performances can give these artists a way to connect with fans without increasing their carbon footprint. No more bands that need to be flown and bussed around – if that’s what they choose.

It’s also a way for musicians to connect to fans who otherwise may not be able to attend a show. Offering venues production suites like LiveControl gives them an extra revenue stream for both the venue and the artist. Virtual tickets often cost less, but they can serve many thousands more of people than the venue can host.

Many people love to throw intimate watch parties for festivals and events at home. These kinds of events are an extension of livestreaming on platforms like Twitch. Audience members for livestreams want to feel like the show is being tailored for them.