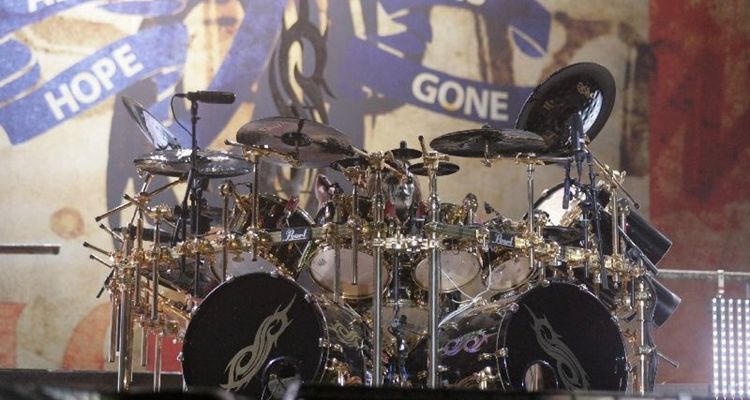 Slipknot’s founding drummer Joey Jordison has passed away at age 46.

Representatives for his family say he died peacefully in his sleep, with no cause given. “Joey’s death has left us with empty hearts and feelings of indescribable sorrow,” the statement from the family reads. “To those that knew Joey, understood his quick wit, his gentle personality, giant heart, and his love for all things family and music.”

“The family of Joey have asked that friends, family, and media understandably respect our need for privacy and peace at this incredibly difficult time,” continues the statement. The family intends to hold a private funeral service for him.

Jordison was a commanding presence behind Slipknot’s drum kit. Behind the scenes, Jordison was instrumental in writing songs and rhythms to propel the band to worldwide success. Jordison was playing with a group of metalheads from Des Moines, Iowa who called themselves the Pale Ones. Jordison suggested they change their name to Slipknot in 1995.

The band’s lineup soon expanded to nine members, each wearing a mask. Slipknot exploded in popularity thanks to their steady touring and live shows at Ozzfest. Their 1999 self-titled album went double platinum.

Joey Jordison stayed with Slipknot until 2013, when he left the band for ‘personal reasons.’

Years later, Jordison revealed he received a neurological disease diagnosis – transverse myelitis. “I lost my legs,” he told the audience at a metal awards show in 2016. “I couldn’t play anymore. It was a form of multiple sclerosis, which I wouldn’t wish on my worst enemy.”

“They got confused about my health issues, and obviously, even I didn’t know what it was at first,” Jordison told Metal Hammer. “They thought I was fucked up on drugs, which I wasn’t at all.”

A few years ago, Jordison revealed he was holding onto demo tapes for songs he’d written for Slipknot around the time of his dismissal. “Maybe someday they’ll surface, maybe they’ll never be heard, but I don’t translate them to any other band,” Jordison said in an interview.

Nathan Jonas Jordison was born in Des Moines, Iowa on April 26, 1975. He grew up in Waukee, where he admits he was a poor student and considered himself an introvert. After discovering Kiss and Black Sabbath, his parents got him a drum kit which sparked his love of playing.