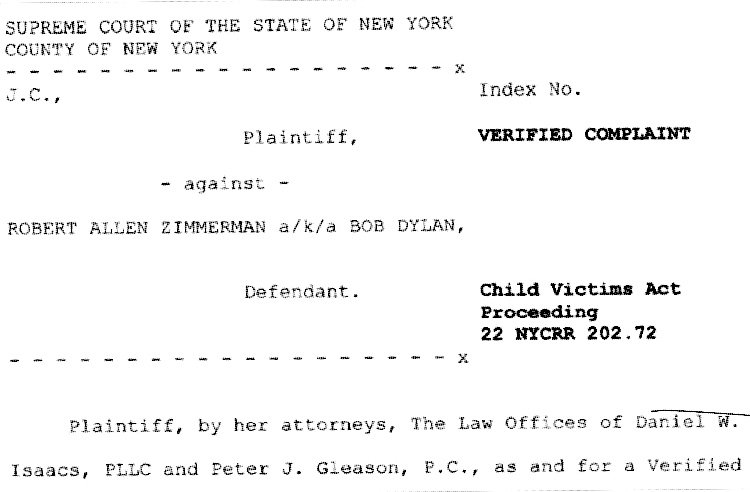 The accusations were filed with the New York Supreme Court in Manhattan on August 13th, and shared with Digital Music News. In lurid detail, the lawsuit accuses Robert Allen Zimmerman, better known to the world as Bob Dylan, of grotesquely drugging, sexually assaulting, imprisoning, and threatening a then-12-year-old girl in 1965.

The filing outlines a series of abusive acts allegedly perpetrated by Dylan against the underage victim. At an apartment maintained by Dylan at the Chelsea Hotel in New York City, the folk legend allegedly befriended, emotionally manipulated, physically threatened, drugged, supplied alcohol, and sexually abused the female victim over a period of weeks. Abusive incidents also occurred at other unspecified locations, according to the legal filing.

As a purported ‘friend,’ Dylan allegedly supplied both drugs and alcohol to the victim, while threatening her physically over a period of approximately six weeks between April and May of 1965. Pulling no punches, the complaint notes that Dylan “befriended and established an emotional connection with the plaintiff… to lower her inhibitions with the object of sexually abusing her, which he did, coupled with the provision of drugs, alcohol and threats of physical violence, leaving her emotionally scarred and psychologically damaged to this day.”

The victim further “sustained physical and psychological injuries… and, upon information and belief, some or all of these injuries are of a permanent and lasting nature.”

The plaintiff, confidentially identified only as ‘J.C.,’ submitted the lawsuit just before New York State’s “look back window” expired under the Child Victims Act.

The provisions of the Act, recently signed into law by former New York Governor Andrew Cuomo, enabled victims of child sexual assault to file litigation regardless of when the abuse allegedly occurred. The extended deadline was designed to allow previously time-barred adults to seek legal redress against perpetrators. It further “ensures those who abuse children are held accountable criminally and civilly and that survivors of childhood sexual abuse have a path to justice,” according to the language of the Act.

New York’s “look back window” officially ended on August 14th of this year following pandemic extensions. Accordingly, the lawsuit against Bob Dylan was submitted less than 24 hours prior to the revised deadline. J.C. is currently 68 years of age and lives in Greenwich, Connecticut, though no other identifying information was offered. Dylan is currently 80 years old.

J.C. is seeking unspecified damages for assault, battery, false imprisonment, and infliction of emotional distress, and is further seeking a jury trial.

Dylan’s legal team quickly pounced on the age of the accusation, while declaring their client’s innocence. “The 56-year-old claim is untrue and will be vigorously defended,” a Dylan representative offered in a statement. The age of the accusation could make the allegations difficult to prove, especially with potential witnesses, corroborators, enablers, or even drug dealers offering sketchy accounts — if they’re still alive or reachable.

By 1965, the young-20s Bob Dylan was a high-profile celebrity and a 60s counterculture icon. That stature may have enabled the abuse outlined in the legal filing, with J.C. simply fawning over her superstar “friend.” Indeed, the filing clearly states that Dylan “exploited his status as a musician by grooming J.C. to gain her trust and to obtain control over her as part of his plan to sexually molest and abuse” his victim.

J.C. says the abuse episodes have had long-lasting effects. Among those are depression, humiliation, and anxiety that “are of a permanent and lasting natures and have incapacitated plaintiff from attending her regular activities.” The victim further claims that she has been forced to obtain medical treatment on multiple occasions to cope with the long-lasting trauma.

More as this develops. The legal filing can be found here.