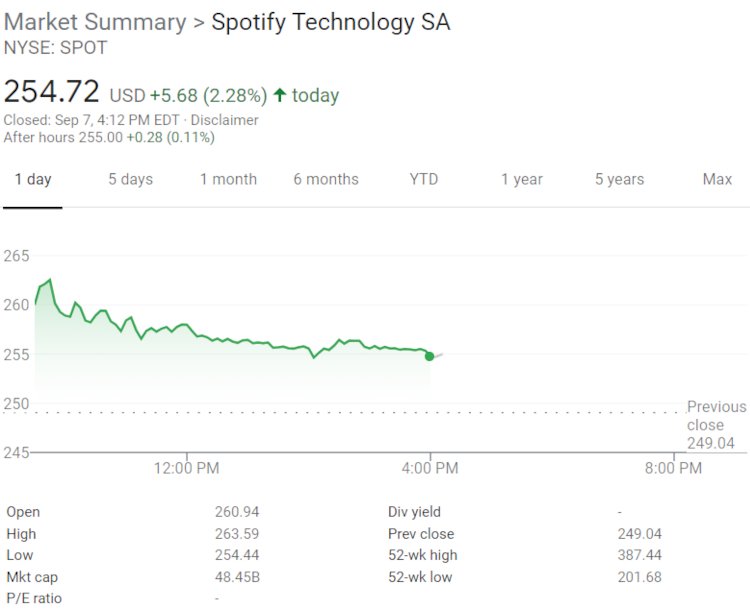 Spotify stock was worth $254.72 per share when the market closed today, and the sum, while reflecting an over 18 percent dip since 2021’s start, marks a 2.28 percent improvement on the day, a nine percent uptick across the last week, and a roughly 13 percent gain since early August.

To be sure, Spotify stock – which approached $300 per share in April before tumbling as low as $217 per share in May – threatened to dip beneath the $200-per-share mark last month, after the Stockholm-based company released its Q2 2021 financials in late July. Consequently, August also saw Spotify unveil a $1 billion stock-buyback program.

More broadly, however, it bears reiterating that SPOT was trading for approximately $150 towards 2020’s start – up from roughly $115 in October of 2019 – and that its massive valuation hike seemed to initiate in earnest in May of 2020, after Spotify announced a reportedly $100 million deal for The Joe Rogan Experience.

Following the aforementioned per-share valuation decline into the $200 range, Spotify stock jumped considerably last Thursday after Apple relaxed its App Store “tax.” And most recently, SPOT experienced another boost on the heels of the initially noted bullish stance from KeyBanc analyst Justin Patterson.

“When coupled with favorable app trends and a more solid competitive position, we believe Street 2022-2023 revenue and gross profit forecasts appear too conservative,” Patterson indicated. “In our view, this makes risk/reward in [Spotify stock] compelling.”

Notwithstanding the stock-price falloff that 2021 has brought for Spotify, certain other investors have also maintained that SPOT is poised to enjoy considerable growth in the coming months and years.

Back in February, for instance, Amsterdam-headquartered The Guardian Fund predicted that SPOT will be worth a full five times more by 2030 – or north of $1,750 per share based upon the stock’s price at the time of the optimistic forecast. “The value lies in the machine learning that drives discovery and engagement, the original content from people like Michelle Obama, Kim Kardashian, and Joe Rogan, the data analytics and distribution for artists,” Guardian Fund execs said.

On the latter fronts, Spotify has continued to make substantial investments in podcasting – including inking a deal with the WWE and a multimillion-dollar contract with Call Her Daddy host Alex Cooper this summer. Given the massive sums involved with these and other plays (as well as the seemingly slow listenership growth that some podcasts are recording), it’ll be interesting to see how many of Spotify’s more than 365 million monthly active users interact with podcasts during Q3 2021.