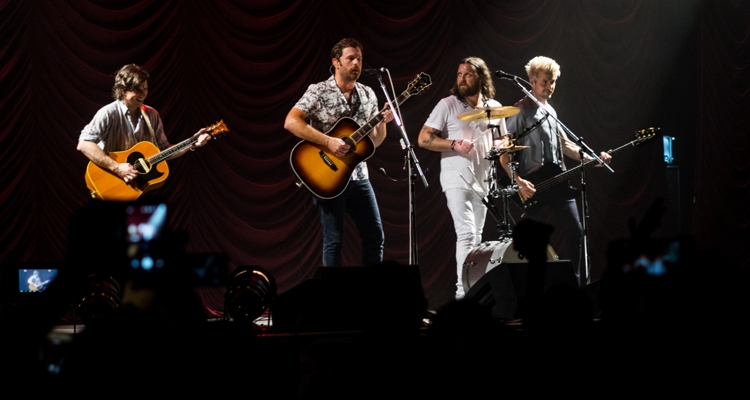 SpaceX’s Inspiration4 – “the first all-civilian mission to orbit” – is scheduled to launch next Wednesday, September 15th (or Thursday the 16th), and the Kings of Leon have announced that they will send a non-fungible token (NFT) of their “Time in Disguise” track on the groundbreaking spaceflight.

Inspiration4 higher-ups just recently shed light upon the “handful of unique items that will go into orbit” aboard the three-day flight, including the “Time in Disguise” non-fungible token from the Kings of Leon, which generated nearly $2 million from NFT album sales earlier this year. Proceeds from the space-bound NFT – as well as the other items that will accompany Inspiration4’s four passengers – will be auctioned to benefit St. Jude Children’s Research Hospital, however.

“Time in Disguise,” the seventh track off Nashville-based Kings of Leon’s eighth studio album, March of 2021’s When You See Yourself, will then become “the first-ever minted NFT song to be played in orbit.” 29-year-old Hayley Arceneaux – a pediatric cancer survivor who received treatment at St. Jude – will serve as Inspiration4’s medical officer, thereby becoming the youngest American to enter space.

Additionally, company officials indicated that Arceneaux “will play the NFT aboard the SpaceX Dragon vehicle,” with the three-time Grammy winner Kings of Leon having recorded “a never-before-released performance” of “Time in Disguise” for the occasion.

According to the NFT’s listing on YellowHeart – which the Chainsmokers co-launched – the winning bidder “will receive the iPhone 12 used by the crew of Inspiration4 to play the NFT in orbit,” besides having a chance to meet the Inspiration4 crew and the Kings of Leon, with “travel and accommodations included.” The NFT auction has already started (the current bid was $50,000 at the time of this piece’s publishing) and is scheduled to conclude on Monday, September 20th.

Addressing their involvement with the charitable initiative in a statement, 22-year-old Kings of Leon said in part: “We’re honored to participate in this historic journey in an effort to raise money for St. Jude, and we’re sending all our best to the crew of Inspiration4.”

Also set to reach space as part of Inspiration4 and raise funds for the children’s hospital are mission jackets featuring “unique artwork” created by St. Jude patients, 66 pounds of hops that Samuel Adams will brew (upon the spaceflight’s return) into an “out-of-this world beer,” a Martin Guitar ukulele that crew member Chris Sembroski intends to play during the voyage, and “50 art NFTs from 50 different artists.”

While one would expect these NFTs to fetch substantial sums because they’re part of a journey into space, some data has suggested that the broader non-fungible token market could be drying up. Moreover, NFT sales have fueled multiple music-industry controversies and legal battles to this point in 2021, including a showdown between Jay-Z and Damon Dash as well as firmly worded criticism from A Tribe Called Quest.