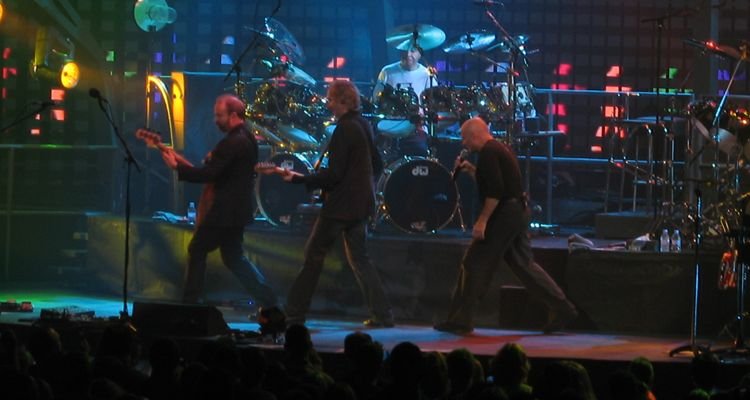 The ‘final’ Genesis tour dates in the UK are postponed due to positive COVID tests within the band.

The band was forced to halt their final four UK dates of the Last Domino? Tour due to the positive case. The statement released by the band announcing the postponement does not elaborate on who tested positive.

“This is a hugely frustrating development for the band, who are devastated with this unlucky turn of events,” the statement from Genesis reads. “They hate having to take these steps but the safety of the audience and touring crew has to take priority. They look forward to seeing you upon their return.”

The Genesis tour kicked off in Birmingham, England on September 20. The Last Domino? Tour consists of Phil Collins, Tony Banks, and Mike Rutherford, accompanied by guitarist Daryl Stuermer and Phil’s 20-year-old son Nic Collins on drums. Phil Collins recently spoke candidly about why his son is filling in for him.

Collins says subsequent surgeries in 2009 and 2015 on his back have affected his nerves. “I’m kind of physically challenged a bit, which is very frustrating because I’d love to be playing up there,” Collins told the BBC in an interview. “I can barely hold a [drum]stick with this hand, so there are certain physical things which get in the way.”

Phil Collins described this Genesis tour as a way for the old guard to put the band to bed.

“We’re all men of our age and I think to some extent it probably is putting it to bed,” he continues in the BBC interview. “I think, just generally for me, I don’t know if I want to go out on the road anymore.”

Collins says Genesis was supposed to go on tour in 2020, but the comeback was postponed due to the pandemic. The Last Domino? Tour is supposed to kick off on November 15 for the North American tour.

It’s the first time Genesis has toured the United States in more than 14 years. Scheduled stops on that tour include Washington, D.C., Charlotte, Buffalo, Detroit, Cleveland, Philadelphia, New York, and Boston. The group is also visiting Canada for two shows in Montreal and Toronto. Collins says the Genesis North American tour will go forward on November 15, but it will likely end there with no additional dates in 2022.