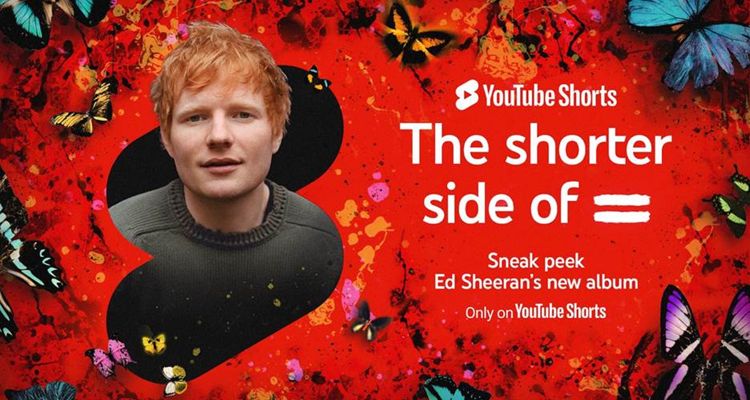 Ed Sheeran is giving his fans a full preview of his album = on YouTube Shorts.

The album is releasing this Friday, but YouTube Shorts is promoting it with 14 videos. “The 14 Shorts encapsulate the very personal journey of Ed Sheeran’s album – four years in the making – with each one bringing to life the intimate and everyday moments that are reflected in the songs,” the press release reads.

“I had a really fun day shooting my YouTube Shorts,” says Ed Sheeran. “I’ve always really enjoyed the music video process, so it was fun to explore a new way of doing that by channeling each song’s theme in a unique way, while also giving you a sneak peek of the album!”

The Shorter Side of = Tracklist

Ed Sheeran’s presence on YouTube has grown significantly since 2006. He is one of the top 10 most-subscribed artists on YouTube.

He has four videos in the Billion Views Club, including “Thinking Out Loud,” “Perfect,” “Photograph,” and “Shape of You.” “Shape of You” is a record-setting video, becoming the second-fastest video to reach one billion views.

“From day one, I knew Ed and his music would have a lasting, global impact and that remains true today,” says Lyor Cohen, Global Head of Music at YouTube. “Ed Sheeran is a storyteller and I am so stoked he is using YouTube Shorts to give his fans an audio and visual preview of his incredibly powerful new album. This is going to be an unforgettable moment.”

It’s certainly an interesting one to see YouTube Shorts competing with TikTok over music industry attention. TikTok has established itself as the music discovery tool for the ‘Zoomer’ generation – but YouTube isn’t ready to give up that title so easily. YouTube Shorts have easily become the closest thing to competition that TikTok has – despite Facebook’s efforts with Instagram Reels.