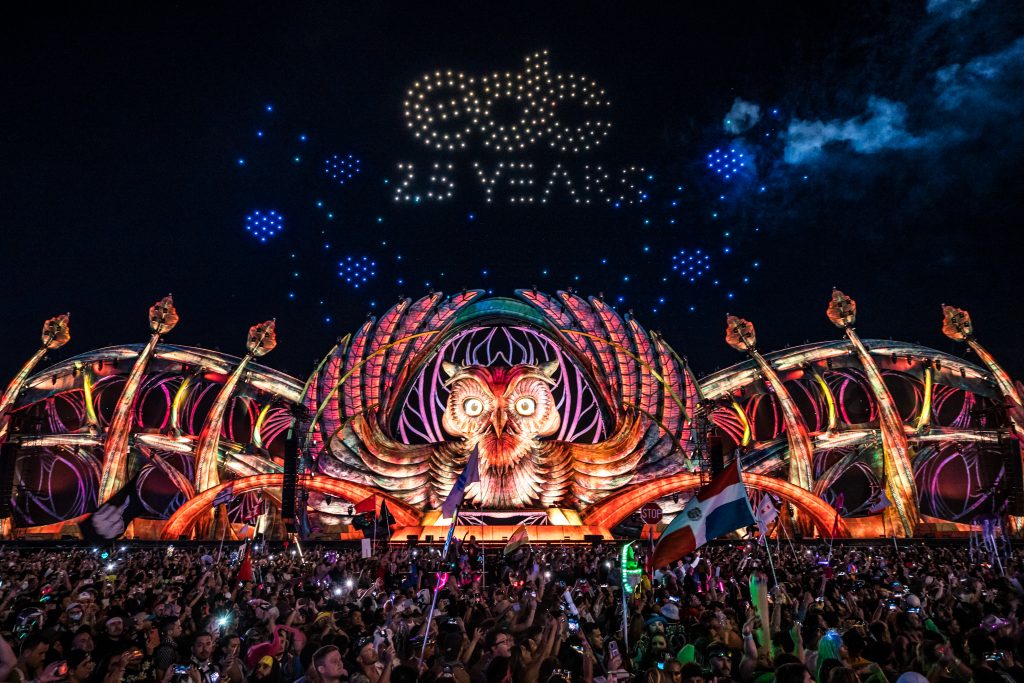 Insomniac celebrated its 25th anniversary for their iconic Electric Daisy Carnival and celebrated its 10th anniversary of the event being held in Las Vegas. As EDC Las Vegas is one of the largest EDM festivals worldwide, I was on the grounds to experience this monumental moment and innovative tech firsthand. Let’s dive in.

To provide some history on EDC, it was first held back in 1997 and debuted at Los Angeles’ Shrine Expo Hall. As the festival expanded outside of just hosting in Los Angeles, EDC made its way to the Las Vegas Motor Speedway in 2011. Being hosted its first year in Vegas, Mayor Oscar Goodman declared an entire week of Electric Daisy events in the city.

With expanding the grounds, more stages, and interactions, EDC Las Vegas has become a staple in the EDM festival community. Insomniac has done a stellar job innovating year after year to provide the most enhanced experience for its headliners (attendees).

On October 22nd to the 24th, EDC Las Vegas welcomed more than 450,000 headliners that weekend. With headlining acts from Kaskade, 3LAU, DJ Diesel (Shaquille O’Neal) and more, the weekend was stacked for good vibes and dance music.

Music artist and producer Diplo surprised attendees with a cameo from Lil Nas X to perform three of his hit songs. Lil Nas X was not the only cameo of the weekend. DJ Snake surprised the crowd with rising artist The Kid LAROI to perform “Stay” and “Without You.” 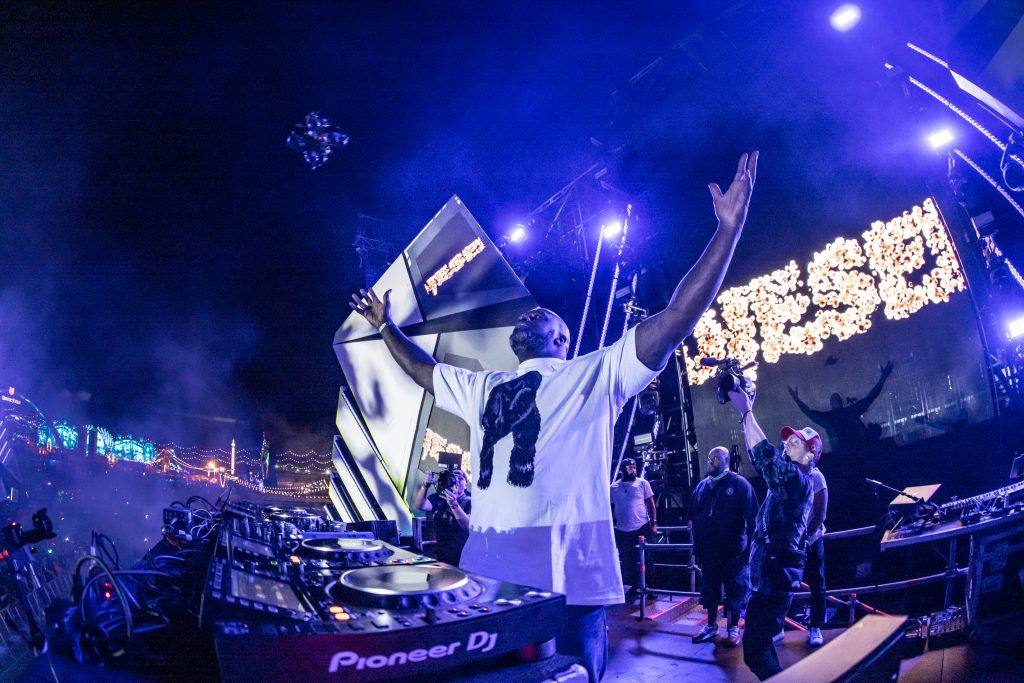 The festival runtime started with an opening ceremony each day from 5 PM to 7 PM. Once the ceremony was over, headliners would be dancing from dusk till dawn, closing off each day at 5:30 AM. With almost two years for Insomniac to plan this anniversary and make it the most memorable weekend for their headliners, the event’s production has put EDC Las Vegas 2021 as the best festival I’ve attended.

Attendees were required to present proof of vaccination or negative COVID-19 test results at least 72 hours prior to arrival at EDC. Now the question is, did they really check for proper vaccination and testing?

On the first day, I was thrilled with how thorough the team was checking for vaccination and testing. The security team took their time to check everybody’s bags and belongings. Some people in line were frustrated that it took a little longer than 30 seconds to be cleared by security. But, I appreciated this to ensure the safety of all getting into the festival.

Once your vaccination or test was reviewed, you were given a wristband that specifically noted that your requirements were checked. This was something that you needed to wear throughout the weekend if you were using the shuttle. Even with this wristband, they continued to perform the same check for vaccination and testing each day along with the thorough security check. A bonus to this premier shuttle was a 2021 EDC fanny pack, and they also provided water bottles and snacks to those in line.

This was my experience with the premier shuttle, though security was supposedly a different experience for festival-goers entering the venue at the standard entry gates. Attendees expressed online that they felt security could have been tighter and checking everyone more than they were.

Entering the festival grounds, I was blown away by how much was happening at once. Guests were able to take a walk through Memory Lane, an aisle with bright screens to walk along and see highlights throughout EDC history. As this was the 10th year of EDC being held at the Las Vegas Motor Speedway, they had decided to expand the use of the venue grounds. 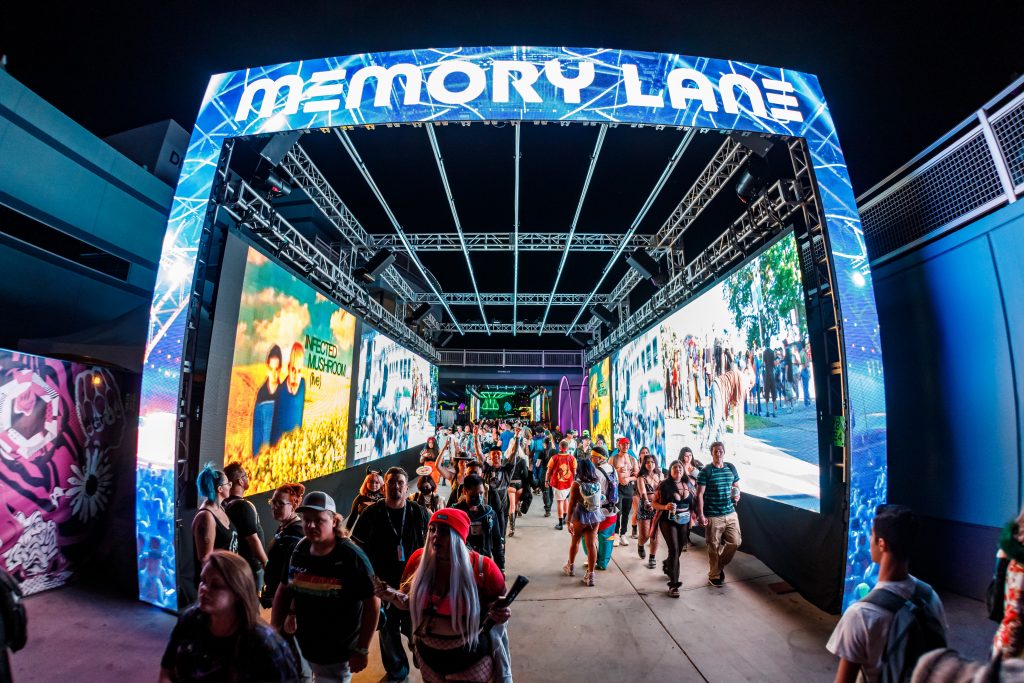 There were eight stages, multiple art carts with artists performing on top of them, theatrical performers roaming around the festival, and many attractions for headliners to engage in. The lineups at each stage were, in a way, set up by categories for separate subgenres within EDM. The kineticFIELD was overwhelming to experience the first hour. I’ve never experienced a stage that large with so much to absorb.

This wasn’t just a regular stage with a massive screen. It had beautiful art sculptures and the large owl with eyes for screens that would sometimes move along to the music. At this stage, you could also catch the beautiful drone show that mesmerized everyone in the crowd, which was a significant highlight of the weekend.

Over 600 drones lit up the sky in celebration of the 25th anniversary. I was hoping Insomniac would include this for EDCLV as I had experienced a taste of the drone show at Day Trip Festival back in July.

Hovering over the kineticFIELD, you would find the drone show followed by EDC’s famous firework show. The combination of the two was truly magic. It almost felt like I was at Disneyland watching the firework show (but even better). Each day, there was a new curated soundtrack for the drone show. This was a great way to change the pace and not have people get tired of the show by the third day. The drones would illustrate the various stages and themes that were used throughout EDC history.

Thank you for a truly transformative Night 1, Headliners!❤️ Please travel home safely and rest up your spirit for Day 2.?⚡️ #EDCLV2021

Different from the beautiful sculptures at the kineticFIELD stage, one stage stood out as the most immersive for headliners. The circuitGROUNDS stage was impactful with its immersive structure.

With a rounded stage and screens all around, there was no escaping the music and visuals at that stage. They had upgraded the set from their 2019 setup. Insomniac continuously innovates with their production each festival to ensure the most enhanced experiences for their headliners and keep up with technology along with their stages. 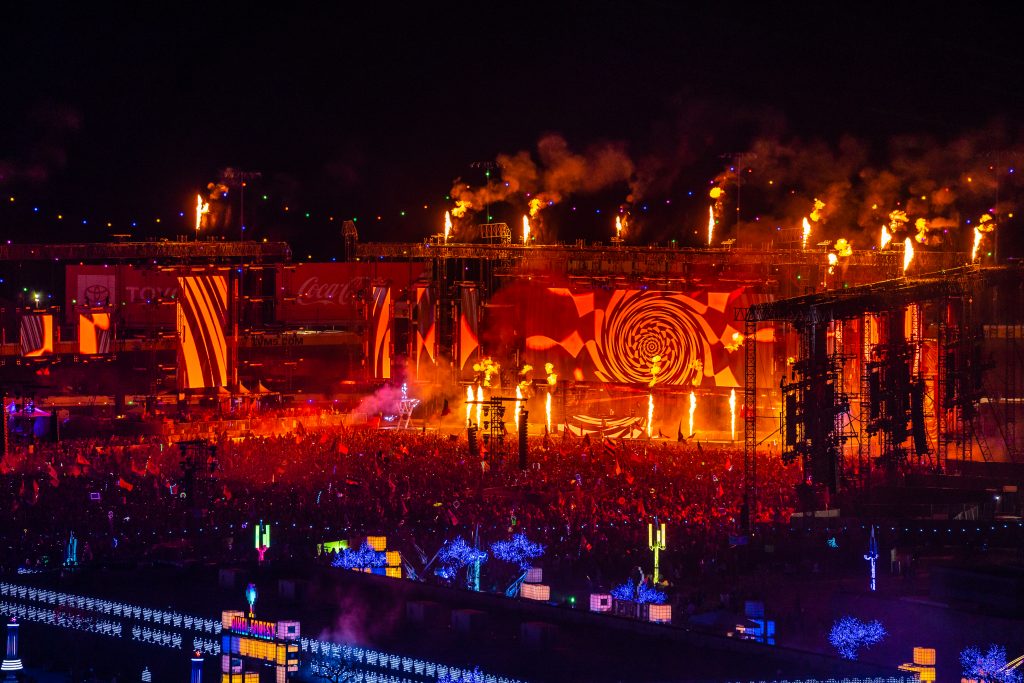 The innovative technologies and sponsors that enhanced the attendee experience did not lack at all. EDC partnered with Coinbase and had an immersive setup to engage in the NFT space.

As NFTs continue to rise in the arts and entertainment culture, having Coinbase at the festival to engage with headliners was a no-brainer. Attendees were able to visit the Coinbase tent and scan for a new NFT each day. Along with this, attendees were able to claim their very own 25th anniversary and NFT coin to commemorate this monumental moment in EDC history.

Additionally, with the rise of the metaverse, EDCLV 2021 became the first music festival to partner with Roblox and allowed people to attend the festival via metaverse. The space was called World Party, and fans enjoyed sets at the virtual stages for the EDC weekend. Over 50 performances were showcased at the World Party, just a quarter of the in-person festival lineup of over 200 performers. Within this party in the metaverse, Roblox mimicked a digital version of specific areas at the festival. For example, you could find the circuitGROUNDS stage, cosmicMEADOW stage, Camp EDC, and more. 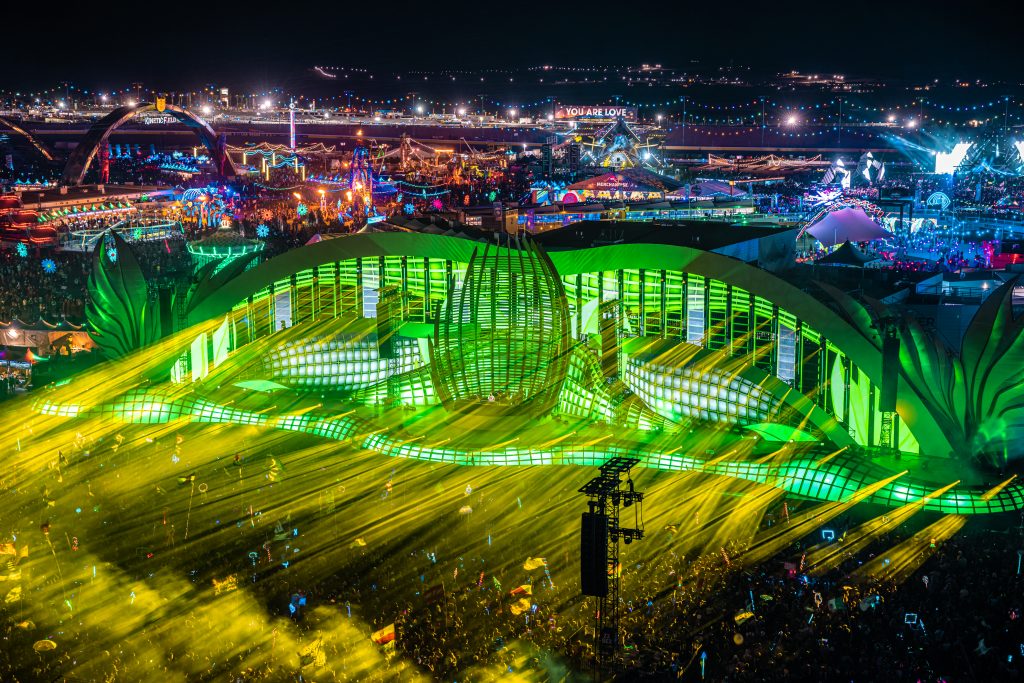 Not only could you attend virtual sets within Roblox, but guests were also able to win real and virtual merchandise within the game. This expands the reach and potential attendees to future EDC events or Insomniac events overall. To capitalize even more on expanding the audience for EDC Las Vegas, the weekend livestream has been something that Insomniac has continued to have throughout the years. I know this firsthand as I have been watching the livestreams throughout the years before attending this year for my first time.

Event organizers should take note of the progression Insomniac continues to make to involve themselves in emerging technology and in the music and art space. This was a significant year for EDC, not only its 25th anniversary but Insomniac’s largest festival after a challenging year for live music dealing with the pandemic. 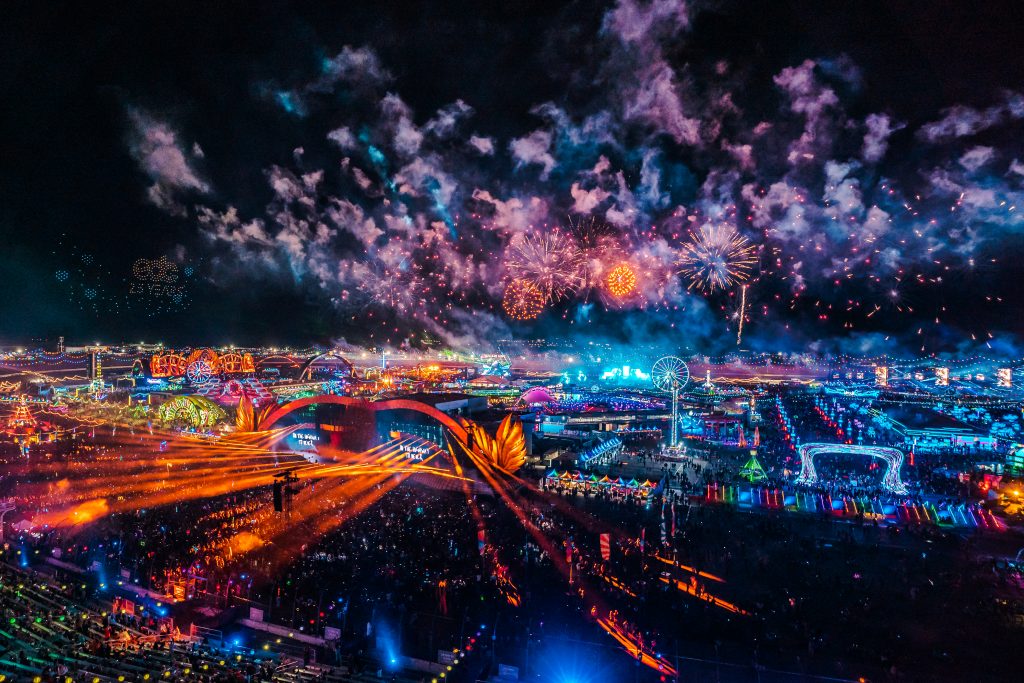 The production was a hit out of the park, and I’m sure with EDC Las Vegas 2022 coming up in May, there will be lots more incorporated with technology and enhanced experiences for headliners.

Insomniac has already released tickets for purchase to EDC Las Vegas 2022 in its original season during May. Through my experience this year and no issues with security or transportation delays, I would suggest the convenience of paying for the shuttle system they have implemented. For any festival I’ve been to, the transportation with the shuttle has been the smoothest I’ve encountered.

I wouldn’t be surprised to see the inclusion and prioritization of involving more technology and immersive experiences for festival attendees with other large festivals coming up in 2022. More so, I am eager to see the advancements and steps event organizers will take after considering and reviewing the strides Insomniac has made this year with EDC Las Vegas 2021.