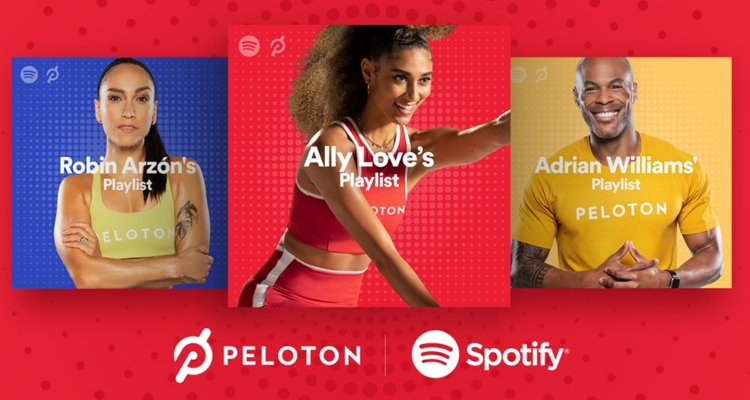 Spotify is expanding its partnership with Peloton to give the brand a front and center feature in its Workout Hub.

Peloton now has a dedicated Curated by Peloton shelf within the hub itself. That shelf showcases seven playlists from Peloton instructors for popular fitness routines. Running by Peloton, Strength by Peloton, and Tunde Oyeneyin’s Playlist are just a few examples of this new expanded partnership.

Spotify says the curated playlists offer a inside look at the music featured in Peloton classes, as well as the instructor.

“In addition to Tunde, this month we showcase the playlists of a diverse group of superstar Peloton Instructors,” the press release reads. Some of the instructors Spotify is featuring this month include:

Spotify also spoke with Cycling and Bike Bootcamp Instructor, Tunde Oyeneyin, during the most recent episode of its For the Record podcast. Oyeneyin says the music part of the exercise class is as important as the instructors role.

“People come to me for a couple of different reasons – if they want somebody to motivate the hell out of them, if they’re looking to be challenged, and if they really want a great playlist,” Oyeneyin says.

“The music on my playlist is definitely a factor that draws people in. And I think sometimes people may not necessarily want the challenge, but they’re so addicted to the playlist that it usually pulls them in. In order to do what I am requiring of you, you have to have a soundtrack that propels you.”

Spotify is even launching a ‘Find Your Instructor‘ quiz for those who are interested but don’t know where to start. The app will ask you a few quick questions and based on your listening behavior, find out which Peloton instructor’s music tastes match their own.