Love the Soundtrack of that Netflix Series? Now It’s On Spotify 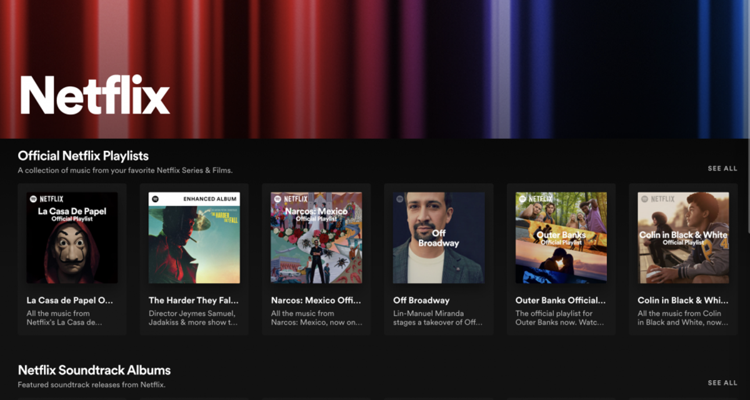 Netflix and Spotify are teaming up for a ‘Netflix Hub’ of soundtrack playlists.

The partnership aims to make it easier to discover the official soundtracks for shows and movies on Netflix. At launch, the Netflix offers soundtracks and playlists for the following shows:

The Netflix Hub also includes Netflix-oriented podcasts like Okay, Now Listen, Netflix is a Daily Joke, 10/10 Would Recommend, and You Can’t Make This Up. Some of the more popular podcasts about Netflix shows like The Crown or Behind the Scenes: Shadow and Bone are included in the Netflix Hub, too.

There’s also an enhanced soundtrack for the new Netflix western film, “The Harder They Fall.” It includes behind-the-scenes looks at the creation of the soundtrack for the movie, led by Jay-Z. Netflix has worked together with Spotify closely in the past for curated playlists of its audio content.

Netflix says it didn’t purchase access to have a hub on Spotify’s platform. It’s not an ad product, but both companies are interested in working together to promote themselves vs. tech giants like Google, Amazon, and Apple.

Spotify is keen to establish these types of hub partnerships with other subscription-based apps. Peloton also has an exercise hub on Spotify where exercise junkies can find their favorite Peloton instructors have curated playlists for their exercises away from their machines.

Services like Netflix, Spotify, and Peloton are teaming up against tech giants to keep their content relevant. If Netflix soundtracks debut on Spotify first – fans are more likely to keep Spotify as their music streaming service even if they have access to Apple Music, Amazon Music, or YouTube Music.

The Netflix Hub is available to Spotify Free and Premium users in the United States, Canada, Australia, New Zealand, the United Kingdom, Ireland, and India.