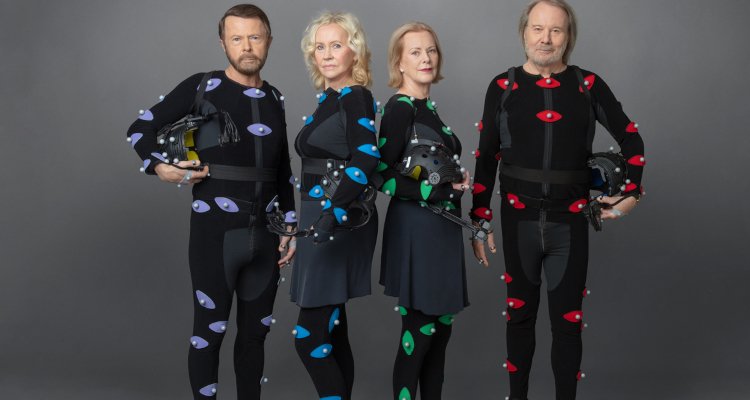 ABBA’s members in motion-capture equipment, which was used to create the holograms for ABBA Voyage. Photo Credit: Baillie Walsh

After noting that it possesses all manner of ABBA trademarks, covering everything from the basic “musical entertainment services by a vocal and instrumental group” to the decidedly specific “porcelain and earthenware beverage glassware,” the lawsuit takes aim at the defendants’ alleged history of “trading on the goodwill and cachet of the famous” act.

ABBA Mania and the other defendants, the plaintiff claims, “include the term[s] ‘official’ and ‘original’ in many of their marketing materials, website pages, and social media handles, which gives consumers the impression that there is some kind of association, affiliation, or sponsorship between” them and ABBA proper.

It’s also alleged that the ABBA tribute-band defendants “target” fans of the group behind “Dancing Queen,” besides purportedly using “a counterfeit” trademark “to illegally trade on and benefit from the recognition and goodwill of” Polar Music’s ABBA intellectual property.

Driving the point home, the plaintiff maintains that ABBA Mania’s name (and associated web address) “is in bad-faith and is intentionally fraudulent, malicious, willful, and wanton.” The company behind ABBA’s releases, trademarks, and promotional efforts says that it sent ABBA Mania two cease-and-desist letters – one in June, the other in October – “in an attempt to amicably resolve this dispute.”

As part of this proposed amicable resolution, the plaintiff said that the defendants “could properly use the phrase ‘ABBA Tribute’ in a non-confusing manner to describe their tribute act so long as the actual name of the tribute act did not include the word ABBA.”

Needless to say, given the current courtroom confrontation, the cover group “refused to comply and cease use of the name,” according to the lawsuit, which calls for relief including “$2,000,000 per counterfeit mark per type of goods or services sold, offered for sale, or distributed.”

ABBA Mania – which was created back in 1999, per higher-ups, and has booked a large number of 2022 performances – has quietly added to its website’s home page a banner reading: “ABBA MANIA IS [IN] NO WAY ASSOCIATED, AFFILIATED, OR ENDORSED BY POLAR MUSIC OR ABBA.”

But it doesn’t appear that this all-caps clarification will satisfy Polar Music, based upon the multimillion-dollar suit, and it’ll be worth following the case moving forward. As an aside, a band called “Pearl Jamm Tribute” renamed itself “Legal Jam” towards 2021’s start after facing legal threats from Pearl Jam.

Of course, the complaint against ABBA Mania arrives just one month following the release of ABBA’s ninth studio album, Voyage, and about six months before ABBA’s expected to kick off the project’s namesake digital concert series.

Capitalizing upon the comparatively minimal scheduling and expense considerations associated with organizing gigs for holograms as opposed to humans, Voyage thus far has booked nearly 200 shows (including several afternoon and evening gigs on the same day) in 2022.