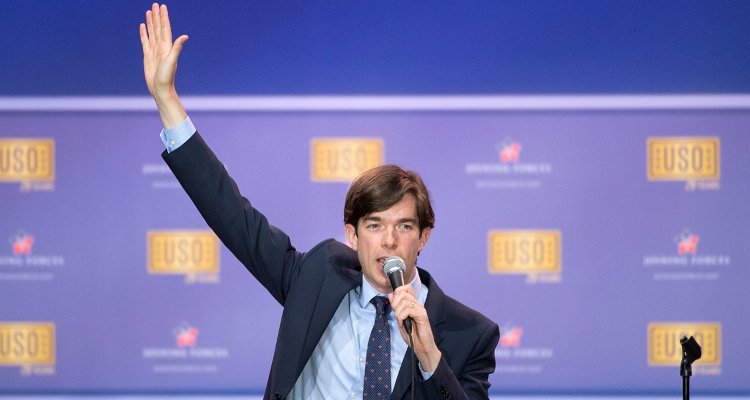 John Mulaney, whose comedy albums have been affected by the ongoing royalty dispute with Spotify, performing live in 2016. Photo Credit: DoD News

Last week, Spotify made headlines for removing comedy albums from stand-up stars including John Mulaney, Kevin Hart, and Lisa Lampanelli. Now, the underlying fight over royalties has intensified, with the Stockholm-based platform ripping down a substantial number of additional projects.

Word of the unexpected comedy-album takedowns came to light after some of the involved professionals took to social media to address their work’s absence from Spotify. Significantly, several of these comedians – the likes of Jeff Dunham, Jeff Foxworthy, Tom Segura, and Liz Miele also saw a portion or all of their work pulled – made clear that they weren’t aware of the precise reason(s) behind the abrupt development.

Then, Spoken Giants, which bills itself as “the first global rights administration company for the owners and creators of Spoken Word copyrights,” appeared to address the matter in an email that comedians subsequently posted online. In the message, CEO (and former BMI exec) Jim King wrote, “We do not have an agreement with Spotify and this must be an indication they know they don’t have all the rights in place to serve this content,” seemingly referring to the rights for the compositions (not the recordings) at hand.

And on Friday, when announcing the completion of a $3.5 million funding round, Jeff Price’s Word Collections emphasized that comics “will be paid for past and future streams and broadcasts of literary works on Spotify…for the first time.”

As mentioned at the outset, the high-profile royalty conflict between Spotify and leading comedians is showing few signs of abating, as the audio-entertainment platform has removed a large number of other works.

The updated list of comedians whose albums – encompassing a portion of releases in most instances but entire discographies in other cases yet – are unavailable on Spotify now includes Bill Burr (originally Let It Go and Emotionally Unavailable, but the deletions looked to expand to his other works during this piece’s writing), Kyle Kinane (Whiskey Icarus), Mitch Hedberg (Do You Believe in Gosh? and Mitch All Together), Steven Wright (I Still Have a Pony), and Lewis Black (The Prophet).

Patton Oswalt (Finest Hour), Larry the Cable Guy (The Right to Bare Arms and a compilation album), and even Joe Rogan (Talking Monkeys in Space), notwithstanding his major Spotify podcasting deal, are likewise among the many impacted acts.

In another indicator that a resolution is far off in the much-publicized royalty impasse between Spotify and comedians, the affected projects have been removed from the appropriate artist profiles entirely – albeit while remaining viewable (but not playable) on playlists. Previously, users could still see the removed albums on creators’ Spotify pages.

Also worth noting is that some of the above-disclosed comedians’ albums are still live on Pandora – for radio-play shuffles only – but not Tidal (where the content is described as “no longer available” when one attempts to play it) or Apple Music (where clicking the content on the web brings up an error message).

However, in what appears to be a testament to the dispute’s complexity, exceptions exist for certain albums. Bill Burr’s aforementioned Let It Go is live on Apple Music, but the entirety of the 53-year-old’s albums look to have been pulled from Tidal and Spotify. John Mulaney’s New In Town, on the other hand, is unavailable to Tidal, Apple Music, and Spotify users alike.

Needless to say, it’ll be worth following the royalty-related confrontation moving forward. While streaming presumably accounts for a relatively small portion of most comedians’ total earnings, the promotional advantages of having albums on Spotify and other platforms could prove significant.

John Mulaney today announced a 33-city 2022 tour with Live Nation. And perhaps not coincidentally, the latter promoter and Netflix this morning unveiled an 11-day-long stand-up festival, which is slated to kick off in late April of 2022. North of 130 acts, Bill Burr, Dave Chappelle, Fortune Feimster, Kevin Hart, Ray Romano, and Jerry Seinfeld among them, are booked to perform.