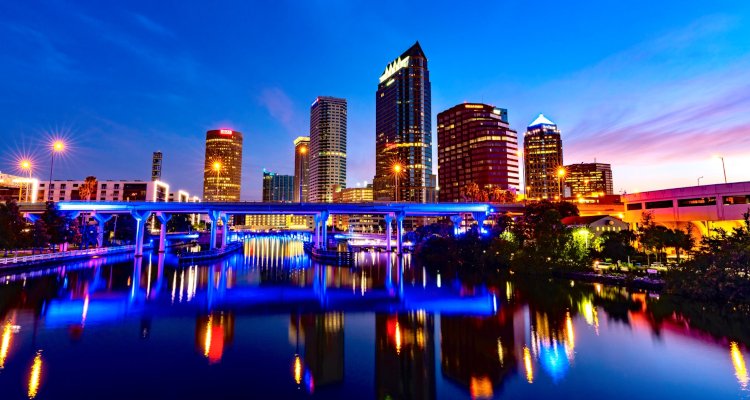 A nighttime shot of Tampa, Florida, where Symphonic Distribution is based. Photo Credit: Jesse Adair

Symphonic Distribution has officially completed a $37 million Series B, which follows a 2017 Series A that brought the 16-year-old company $4 million in capital.

Symphonic Distribution unveiled this latest multimillion-dollar raise via a blog post, and the Tampa-headquartered business’s founder and CEO, Jorge Brea, discussed the round with the Tampa Bay Business Journal. According to the release from the “100% independent distribution and music technology company,” Philadelphia’s NewSpring Growth led the Series B along with existing (Tampa-based) investor Ballast Point Ventures.

Symphonic – which hired former SoundExchange higher-up Ali Lieberman as VP of product last month – intends to put the $37 million tranche towards accelerating “technology development,” increasing the size of its team, expanding into new markets, and executing “acquisitions across the music and technology sectors,” higher-ups said.

Interestingly, Brea in a statement (as well as the interview) touched upon the possibility that these buyouts could encompass catalogs, with Symphonic Distribution possibly joining the considerable number of entities that have bought song rights since the start of 2020. “This investment will enable us to invest more in our clients, our technology platform, strategic initiatives, intellectual property and other acquisitions,” he relayed in part.

And in the aforementioned sitdown with the Tampa Bay Business Journal, Brea specified that his company is projecting $12 million in net revenue for 2021 – quadruple the amount that Symphonic was generating at the time of its 2017 Series A.

Lastly, the longtime music producer Brea didn’t rule out a Series C or a sale down the line – albeit while emphasizing his plans to pursue organic growth for “the next year or two.”

“That will be the interesting thing; anything can happen in five years and there are larger companies who could acquire or merge with us,” Brea told the Tampa Bay Business Journal.  “Or if a Series C appears – if it looks good to everyone involved, that could be an opportunity. But certainly, in the next year or two we’re just putting our head down and growing organically.”

More broadly, Symphonic’s largest raise to date arrives as major capital influxes (and correspondingly massive valuations) continue to reach the distribution space. August of 2021 saw indie distributor DistroKid receive a “substantial investment” at a staggering $1.3 billion valuation, for instance, and Spotify in October quietly sold two-thirds of its stake in the business for $167 million.

Meanwhile, Steve Stoute’s UnitedMasters in 2021 completed two $50 million funding rounds, the latter of which delivered a $550 million valuation for the five-year-old company. And indie label and distributor Believe, for its part, made several acquisitions on the year and reported a 27.1 percent YoY revenue boost for Q3, at about $162.59 million (€144 million).