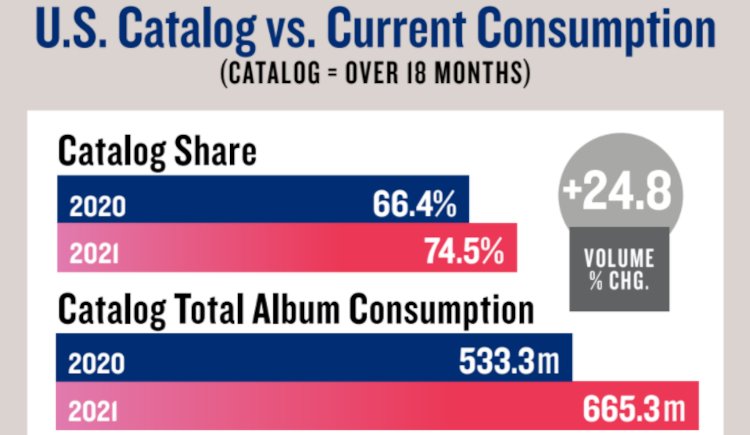 Even with an almost 10% increase in U.S. audio streams, catalog releases during 2021 accounted for nearly 75% of domestic music consumption. Photo Credit: MRC Data

Catalog releases – or tracks that debuted more than 18 months ago – experienced a 24.8 percent year-over-year consumption hike in the U.S. in 2021 and accounted for nearly three-quarters of domestic listening, even as total stateside audio streams grew by nearly 10 percent YoY.

These and other interesting stats came to light in MRC Data’s newly released 2021 yearend report. In addition to the 9.9 percent boost for stateside on-demand song streaming (which finished at 1.13 trillion streams), global on-demand audio streams (not including video) jumped 26.3 percent YoY, to 2.74 trillion, according to the analysis.

Notwithstanding the improvement – and particularly the audio streams growth in the U.S. – catalog releases’ stateside consumption share surged 24.8 percent YoY, as noted, to 74.5 percent, the report states.

And despite the strong streaming performances of 2021 tracks from Olivia Rodrigo, Adele, and BTS, to name some, non-catalog consumption, covering releases that are less than 18 months old, dropped from 33.6 percent in 2020 to 25.5 percent in 2021, per the breakdown.

Regarding the 2021 growth of both U.S. streaming volume and catalog consumption, it bears highlighting that some older tracks have found younger audiences after going viral on social media. Predictably, a full 99 percent of the U.S.’s Gen Z residents use streaming services to enjoy music, against 98 percent for millennials and 96 percent for Gen X, according to the report – with each total easily topping those of other nations.

Perhaps the most telling data on this front, however, pertains to U.S. baby boomers, a full 89 percent of whom stream music weekly, the text relays. Mexico placed second in the category, with 75 percent of residents between the ages of 56 and 74 using streaming services to access music “in a typical week.”

But the figure (and the percentages for other generations) is comparatively small in the world’s largest music markets aside from the U.S., including the U.K. (41 percent of baby boomers stream music during a typical week), Japan (34 percent), and Germany (37 percent).

Because of this streaming growth and a major YoY gain for U.S. vinyl sales, total stateside album sales, for both digital and physical, finished at 109 million (up 6.3 percent YoY), the document shows.

Aligning with other markets’ recently released data, vinyl continued to grow in the U.S. during 2021, when consumers purchased 41.7 million LPs – 51.4 percent more than in 2020, and enough to overtake CDs and their 40.6 million units shipped stateside on the year. The latter total nevertheless reflects a 1.1 percent YoY improvement for the format.