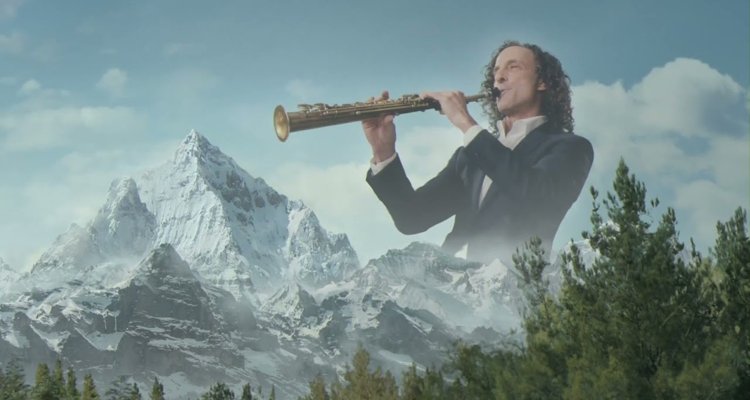 Busch Light is partnering with the sax player for an advertisement that will air during the big game. The spot sees Kenny G’s figure superimposed over the screen as he blasts a sax solo next to a can of Busch Light. You can watch the Kenny G Super Bowl ad here.

The scene opens with two friends dressed in hiking gear sitting beside an alpine lake. One of them hands a can of Busch Light to the other and says, “You know, when you crack open a Busch Light, the mountains start singing.” The other hiker opens his can, and a giant, bearded man representing the mountain appears. He breaks into an over-the-top impression of Willie Nelson about the majesty of the mountains.

Soon, three other figures join the bearded giant. “Head for the mountains, the mountains of Busch,” they sing before one of the figures looks into the distance and yells, “Hit it, Kenny G!” The saxophone virtuoso then lights up the quartet with one of his sax solos. “It’s so smooth,” one of the hikers murmurs, while admiring the giant and Kenny G.

The over-the-top song the bearded giant sings is an homage to Busch’s original marketing campaign. It aired more than 40 years ago and included mountainous landscapes similar to those seen in the new Kenny G Super Bowl ad.

“More than 40 years ago, ‘it’s cold and it’s smooth, and it’s waiting for you’ launched Busch Light’s jingle into the hearts and minds of beer fans,” says Daniel Blake, Group Vice President, Budweiser & Value at Anheuser-Busch.

“And when the time came to revive that iconic jingle, there was only one person smooth enough for the job, American jazz saxophonist, and one of the best-selling artists of all time, Kenny G. We can’t wait for Busch Light fans to see their favorite beer show up on one of the biggest days in sports.”

Kenny G has won one Grammy and has been nominated for 17 others. HBO Max recently released a documentary highlighting his life called “Music Box: Listening to Kenny G.”