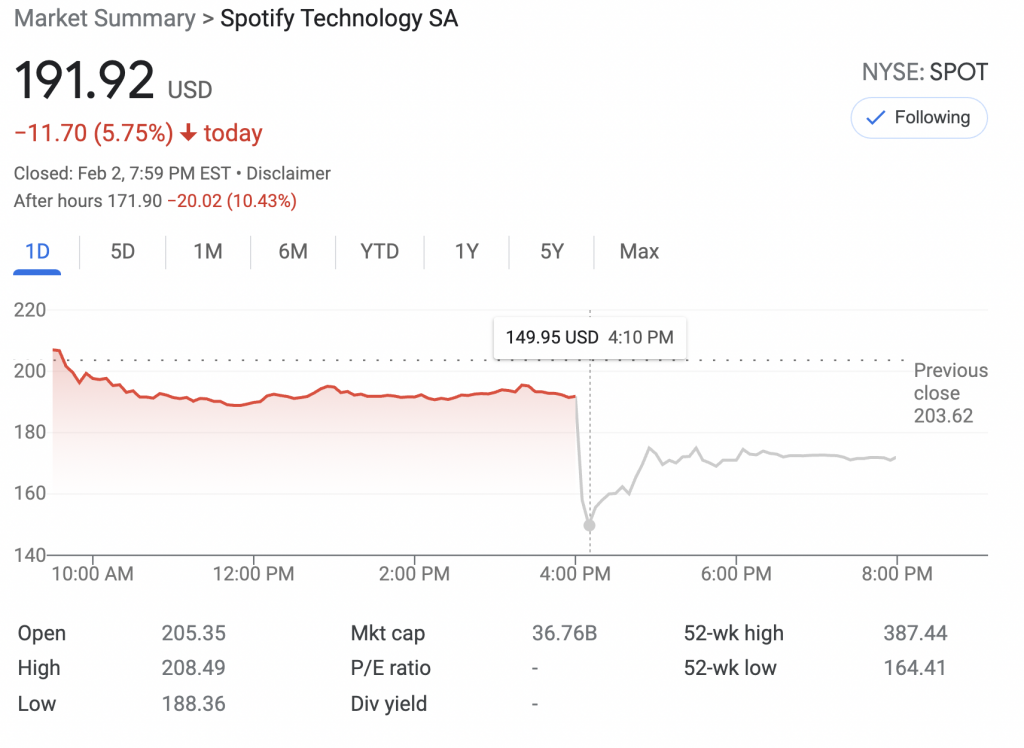 SPOT shares immediately entered a post-market tailspin. Within 10 minutes of the market’s final bell, shares tanked nearly 22% before recovering some ground. But future trading sessions are likely to be choppy — to say the least.

Spotify now counts an impressive 180 million premium subscribers across the globe, which was unthinkable just a few years ago.

Spotify indicated that its latest haul of 8 million new subscribers (accomplished in just three months) was at the upper range of its guidance. Total users topped 406 million, also at the upper-end of its guidance, with revenue jumping 24 percent over the year-ago quarter to €2.7 billion ($3.05 billion).

That beat analyst expectations of $2.99 billion for the quarter. Revenue from Spotify’s premium subscriptions was up 22% to $2.59 billion, versus the analyst expectation of $2.57 billion. Spotify improved its loss-per-share from —€0.66 last year to just —€0.21 per share this year.

Not helping matters was a €7 million ($7.91 million) operating loss.

Since December, Spotify stock has been getting pummeled as markets shifted out of non-profitable tech companies and shakier bets. On that front, Spotify has flirted with profitability in previous quarters, but its shaky financial picture put the company on the wrong side of 2022’s correction.

Spotify counted ‘just’ 155 million premium subscribers at the end of 2020.  That’s a decent 16.1 percent increase, though a sizable chunk of those gains came from developing nations and emerging markets. While more developed (and higher-priced) countries are leveling off, the bigger problem is what lies ahead.

On that front, the streaming platform project a gain of just 3 million premium subscribers during the current quarter.

That was surprisingly low, and could indicate a range of problems. Given that the projection was issued on February 2nd, nearly halfway through the current quarter, the lower figure could suggest problems with defecting subscribers.

Spotify is forecasting monthly active users of 418 million, short of analyst expectations of 422 million. Spotify’s forecast for its premium subscription growth has also dropped from an expected 185.3 million to just 183 million. Revenues are forecast in line with expectations at around $2.93 billion.

Whether that is sparking a snowball effect is uncertain, though late today, the venerable cast of Crosby, Stills & Nash declared their desire to ditch Spotify. Just one problem: the legendary trio doesn’t own the rights to their music and can’t unilaterally make that decision.

But the removal is still likely if labels and IP owners agree. As of late Wednesday (February 2nd), the group’s music is still on the platform.

Spotify says it no longer plans to issue annual guidance “since the vast majority of our initiatives are multi-year in nature and measured as such.” Quarterly guidance will still serve as checkpoints against progress for the company.

Spotify also says it plans to simplify by providing one estimate for each metric rather than the current range of outcomes. Spotify is also planning an investor day later this year to offer “an update on the strength of our platform and our advancement towards our long-term operating goals.”

The company’s promises to consumers concerning Spotify HiFi last year haven’t been met. Spotify said it would release more information about its higher-fidelity audio subscriptions last year, but it has yet to do so.