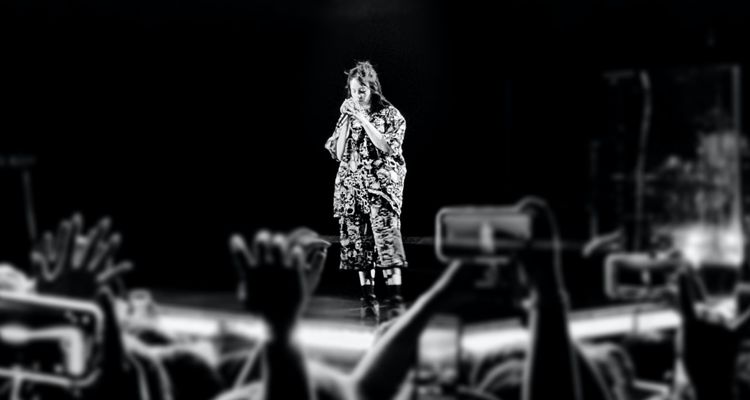 Billie Eilish stopped her Atlanta concert to get a fan an inhaler after experiencing breathing issues.

A video on social media is making the rounds showing Eilish stopping her February 5th show in Atlanta. Eilish stops her Happier Than Ever World Tour performance to seek aid and direct medics to a fan experiencing respiratory distress in the audience. Eilish asked her if she needed an inhaler before directing medics to her. “It’s OK, give her some time. Don’t crowd,” Eilish can be heard saying in the clip. “I wait for people to be okay before I keep going,” adds the singer.

The clip seems to be a veiled reference to Travis Scott and what happened at Astroworld. The Astroworld tragedy ultimately left ten people dead in a ‘crowd crush’ event where the concert was stopped several times over the course of the night. Ten people died in a stadium filled with more than 50,000 people as the crowd rushed the stage.

Around 9 pm just minutes after Travis Scott took the stage, fans near the stage were struggling to stay on their feet. Less than 10 minutes into the show, concertgoers are screaming they can’t breathe. Scott stopped his show for the first time around 30 minutes into the set and drew attention to someone who needed help. “Somebody passed out right there,” Scott says on the now-deleted Apple livestream. Scott then continued his performance, but stopped two more times to call out issues.

The concert stopped a third time around 9:42 pm, but Scott didn’t stop the concert until 10:12 pm. That’s an hour after Travis Scott took the stage. Attorneys for Travis Scott say the artist didn’t know what was happening during the concert. Around 300 people were treated by medical personnel on-site, while 25 more were transported to a hospital for their injuries.