Spotify Stock Has Lost 50% of Its Value In the Past Year Alone — $32.3 Billion In Market Cap Wiped Out 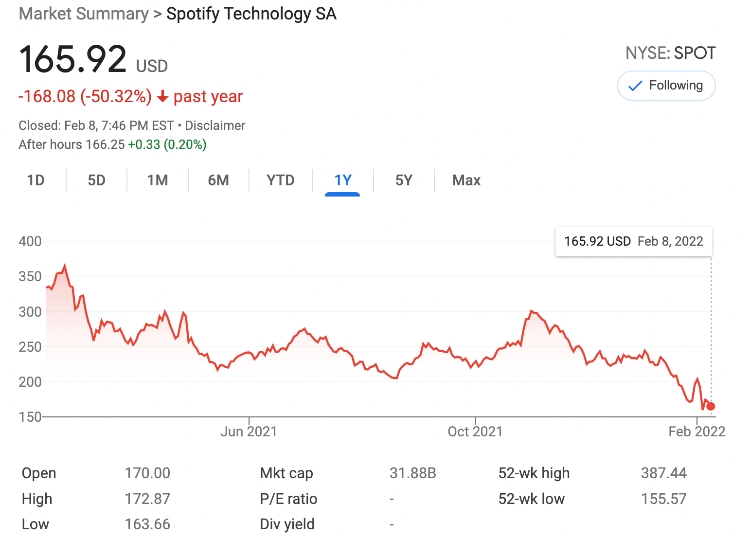 Spotify stock has lost an astounding 50% of its value over the past year alone, a drop of more than $32 billion in market cap.

Once upon a time, Spotify stock was the darling of Wall Street. Now, a confluence of factors is driving SPOT southward and wiping away billions in market cap. But what’s causing the sharp decline?

The exact reasons are difficult to pinpoint, though both internal and external headwinds are broadly driving the plunge. Since November, SPOT has been dropping precipitously, with broader economic concerns and anticipated rate hikes by the Federal Reserve dragging Spotify into the red. As 2022 kicked off, the tech-heavy Nasdaq found itself in correction territory as investors shifted out of more tech-heavy and profit-challenged entities. SPOT is traded on the New York Stock Exchange, though the description still fits — and Spotify has been getting dumped for more stable bets.

As of Tuesday’s bell (February 8th), the Nasdaq Index is still more than 10% down on the year. By comparison, Spotify stock is down more than 32% in 2022, thanks partly to recent slowdowns in premium subscriber gains, overall MAU growth plateaus, and tepid future projections. As Digital Music News first tipped last week, Spotify’s current-quarter growth projection of just 3 million Premium subscribers spooked investors and prompted a sharp selloff.

Then there’s the Joe Rogan factor.

Since Neil Young yanked his content from Spotify in protest of Rogan’s ultra-popular podcast, only a few other artists have followed suit. That includes Joni Mitchell and Nils Lofgren, though ‘neo-soul’ singer-songwriter India Arie dropped a separate bomb by uploading a video compilation showing the multiple times Rogan has uttered the n-word over a multi-year span.

Multiple apologies and promises later, it’s still unclear what the net impact on subscribers will be. Some Wall Street analysts are looking at this through the same lens as the recent Netflix fiasco involving Dave Chapelle, which didn’t result in massive subscription drop-offs for the on-demand video giant.

But video is a different world than music: a survey conducted by Forrester Research showed that 19% of Spotify subscribers had already canceled their subscriptions or planned to cancel soon. But how many will actually pull the trigger?

That’s now the $32 billion question. Already, Spotify’s tepid 3 million Q1 projection is troubling and could reflect a raft of defections. The projection was issued midway through the quarter and may have incorporated recent unsubscribes.

And of course, this is Wall Street. Which means the next question is, ‘should I buy the dip’?

Other analysts are urging caution. That includes Bank of America analyst Jessica Reif Ehrlich, who kept her ‘Buy’ rating on SPOT but dropped her price target from $352 to $262. Ehrlich noted that Rogan is ‘increasingly becoming a risk’ for the streaming giant.