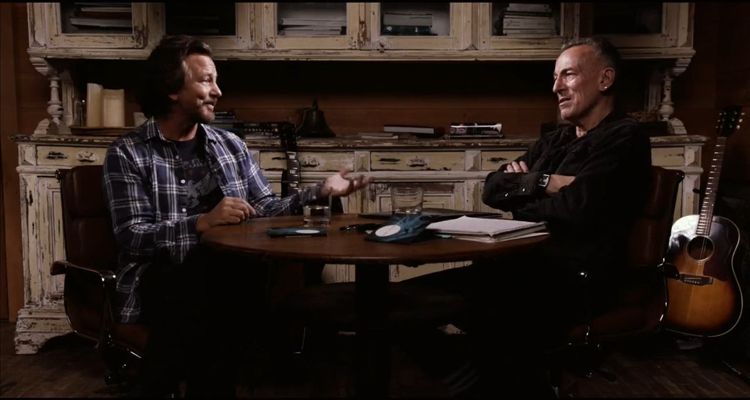 Bruce Springsteen recently sat down for an in-depth conversation with Eddie Vedder.

The interview was exclusive to Amazon Music for 48 hours before appearing on Eddie Vedder’s YouTube page. The interview was directed by Thom Zimny and was filmed at Springsteen’s farm in Colts Neck, NJ, while Vedder was in the area performing. The two rockers discuss Vedder’s recently released solo album, Earthing.

“I still hear the punk and even a certain sort of metal influence on some of these songs. Who influenced you in that part of your music?” Bruce Springsteen asks Eddie Vedder.

“The stuff that got put in my blender started maybe [with] Jackson 5 when I was a kid, Beatles, and then the Who took over big time,” Vedder says, before motioning to Springsteen himself. “And then, my friend…” he says, trailing off with a smile. “Ah, grazie,” Springsteen laughs.

“The Band, and then into Split Enz and Talking Heads and Sonic Youth and Fugazi. Mudhoney. I guess you put all that in, and you just hit pulse.” The two rock stars have performed together several times over the last two decades. In this half-hour chat, you get a glimpse of two old music friends discussing what makes them happy.

Bruce Springsteen comments that he can hear “the ghost of Tom” when speaking about the track “Long Way.” Eddie Vedder says the influence for that song ended up being Tom Petty-like – but it wasn’t intentional.

“Somebody acquired for me a Guild four-string tenor [bass]. It almost looks like a Hofner in a way,” Vedder says. “So I started playing some little things and had my guy record it, and then I put drums on it and put some vocals on it, and it all happened in an afternoon. But I didn’t know what the chord were because I’m playing a tenor – I’m just making shapes and sounds and all that.”

Vedder says he gave the track to his producer Andrew Watt, who revealed the chords were standard G, C, and D. “I thought I was coming up with some really interesting ones that’d never been played before,” Vedder laughs. “It was very simple chords, and that was kind of how Tom Petty would write.”