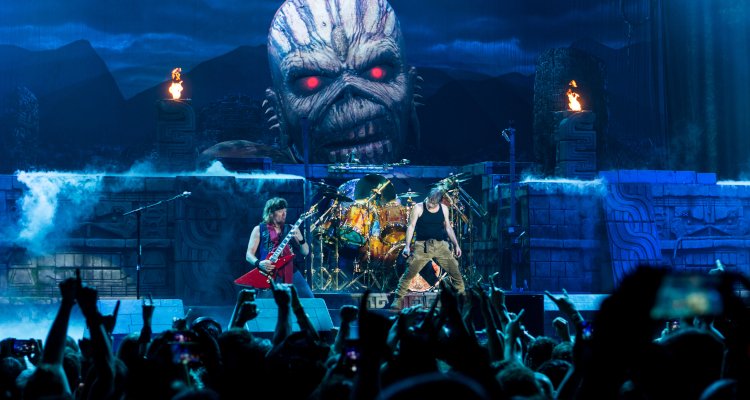 To commemorate the 40th anniversary of The Number of the Beast, the third studio album from Iron Maiden, BMG has teed up a “commemorative cassette release.”

Berlin-based BMG revealed its plans for the four-decade anniversary of The Number of the Beast this morning. The eight-track effort first became available to fans in late March of 1982, and several of its well-known songs remain prominent today. “Run to the Hills” currently boasts 239.10 million Spotify streams, compared to 159.10 million for “The Number of the Beast” and 108.69 million for “Hallowed Be Thy Name.”

In the U.S., BMG intends to release the commemorative The Number of the Beast cassette exclusively through indie record stores on Friday, March 25th, 2022. The frequent music-IP investor BMG also disclosed that the product will feature 2015 remasters of the album’s eight songs, “with front cover color art based on the 1982 C-60 cassette release plus a re-designed & updated inlay.”

Higher-ups didn’t identify the cassette’s price in their formal announcement message, instead directing prospective customers to a store locator for availability specifics and other information. Many Iron Maiden diehards have promptly taken to social media to weigh in on The Number of the Beast’s 40th anniversary edition, and most of these early responses appear positive – despite a few fans’ indicating that they don’t possess a cassette player.

More broadly, it’ll be interesting to see how the release performs commercially; notwithstanding vinyl’s well-documented sales resurgence, a full-scale “cassette comeback” has yet to materialize. (The audio cassette tape’s inventor, Lou Ottens, passed away at the age of 94 about 11 months ago.) Especially because of vinyl’s expensive, delay-heavy manufacturing process, though, cassettes could well become an increasingly popular format for new albums (and anniversary editions) moving forward.

To be sure, multiple musicians have already embraced cassettes and CDs to assuage supporters’ demand for physical music products – while avoiding the headaches associated with vinyl. Plus, Eddie Vedder debuted Earthling one week ago, including CD, vinyl, and cassette versions, whereas Flume is preparing to release his third album, Palaces, on cassette in May.

In a testament to the aforementioned production woes of vinyl, those who bought Earthling on the format won’t begin receiving their orders until late July of this year, according to Pearl Jam’s website. Meanwhile, Universal Music in 2021 unveiled a collection of Nevermind rereleases in commemoration of the iconic album’s 30th anniversary, which arrived last September.

But the individuals who fronted nearly $260 for the most expensive of these rereleases, including “8 180-gram LPs” and more, will have to wait until late May of 2022 for their orders to ship, per the Nirvana webstore.