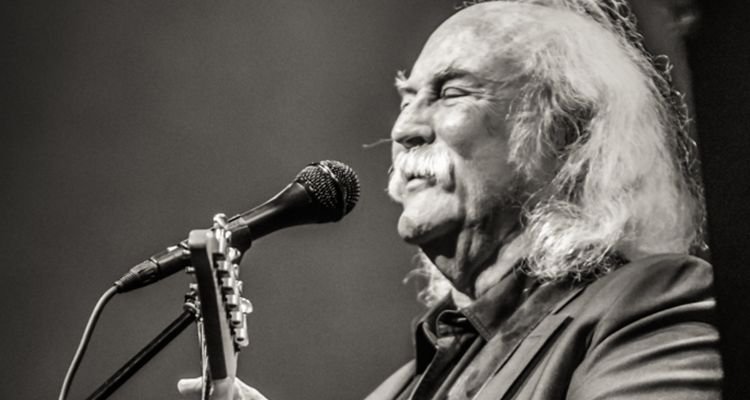 David Crosby has spoken at length about the state of the music industry & the Spotify controversy.

Spotify reportedly paid $200 million to get the Joe Rogan Experience as an exclusive podcast. But as the COVID-19 pandemic took over, Rogan’s insistence on hearing ‘both sides’ of any argument took a turn. 270 medical professionals wrote an open letter to Spotify begging for content advisories to be put in place on their podcast episodes.

It took a while for David Crosby’s solo music to be removed from Spotify. That’s because Irving Azoff owns Crosby’s publishing rights. Crosby says he was expecting some resistance there, but got none. “If that’s what you feel you have to do, we’ll go along with it,” Crosby says Iconic and BMG told him. “I was stunned. That is not normal corporate behavior. Normally they go for the dollar and the quickest possible answer. They don’t support a moral stand.”

Crosby continues, saying he doesn’t like any of the streaming music services, it’s not just Spotify. “They don’t pay us properly. Their proportion is wrong. They’re making billions with a b and they’re paying out pennies with a p. That’s not OK. It’s not OK in that it took away half my income, and it’s not OK in that, especially, it makes it impossibly difficult for young people to make it in the business.”

Crosby is very vocal about his dislike for Spotify and most streaming services, much like Neil Young. “I’m not willing to lick their boots because I need their pitiful $1.57 they’re paying me. They’re not doing the right thing and in the long run it will get them. In some kind of karmic thing, it’s going to come around and crush them.”

Crosby’s thoughts on Joe Rogan are somewhat neutral. He admits Joe Rogan has a “right to spew his garbage.” “I think Spotify has a right to put him up there. I absolutely will fight for their right to do that. I have a right to not be associated with it.” Crosby says he told a friend that if he was selling his music in a marketplace, he wouldn’t choose to set up shop next to spoiled meat.

He also says he believes that younger artists aren’t in a position to speak out, as some have asked. “They have no ability at all. They have nowhere to go. They have Bandcamp. Some things like that are pretty good for them.” It’s an interesting conversation with one of music’s greats. Be sure to check out the rest of the interview with David Crosby. He speaks directly about the impact music streaming and the pandemic has had on his life.