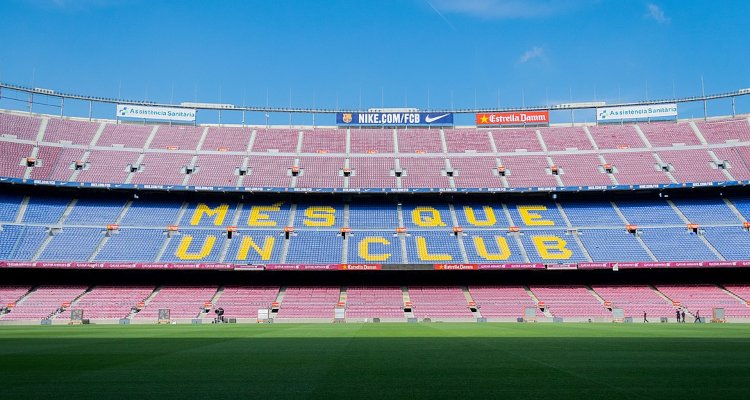 A shot of FC Barcelona’s Camp Nou stadium, soon to be renamed Spotify Camp Nou, and the team’s motto, translating to “more than a club.” Photo Credit: Zicarlo van Aalderen

Five weeks back, reports indicated that Spotify (NYSE: SPOT) was closing in on FC Barcelona’s naming rights as part of a $320 million deal. Now, the Stockholm-based company has officially announced “a long-term partnership” with the 123-year-old soccer club, which will rename its famed stadium “Spotify Camp Nou.”

Spotify unveiled the reportedly $306 million agreement with FC Barcelona, which generated $693.53 million (€631 million) during the 2020-2021 season despite a 26.2 percent year-over-year income falloff, via a formal release. The Spotify-Barcelona union is poised to kick off this coming July, with the audio-entertainment platform becoming “the Main Partner of the Club and the Official Audio Streaming Partner.”

Additionally, the 2022-2023 season (the 2021-2022 season is scheduled to conclude on May 22nd, 2022) will see Spotify’s “brand” make its way onto “the front of both men’s and women’s team shirts and training shirts.” The streaming service and the Spanish soccer team also disclosed that they are preparing to “work together to create opportunities for the iconic shirt to be a space that celebrates artists from across the world.”

“Spotify will use the partnership to shine a spotlight on artists from all over the world,” elaborated the company, which is expected to lose an estimated 1.5 million Russian subscribers after ceasing most operations in the European nation. “This will bring the worlds of music and football together, giving a global stage to players and artists at Spotify Camp Nou.”

Lastly, regarding the newly revealed partnership’s nuances, the pact remains “subject to the ratification of the Barcelona Members Assembly” in early April. In a brief interview included with the formal release, Spotify chief freemium business officer Alex Norström spoke of the agreement and his company’s vision for the multimillion-dollar union.

“Spotify is working with Barça to leverage our access to in-stadium elements to amplify artists and enable discovery,” said Norström, whose boss expressed interest last year in acquiring the Arsenal Football Club. “For example, using the dynamic digital displays to showcase and geo-target relevant artists to Barça’s global TV audience. While viewers in Europe may see a message about one artist, TV viewers in India could be served a different and locally relevant message.

“Second, as shirt sponsor, Spotify will work to create a new platform to amplify artist voices. We think this can be more than just a Spotify logo on a shirt. The question we’ve asked is: How can Spotify work with FC Barcelona to make the shirt a bigger platform with more opportunities for artists?” continued the 11-year Spotify veteran Norström.