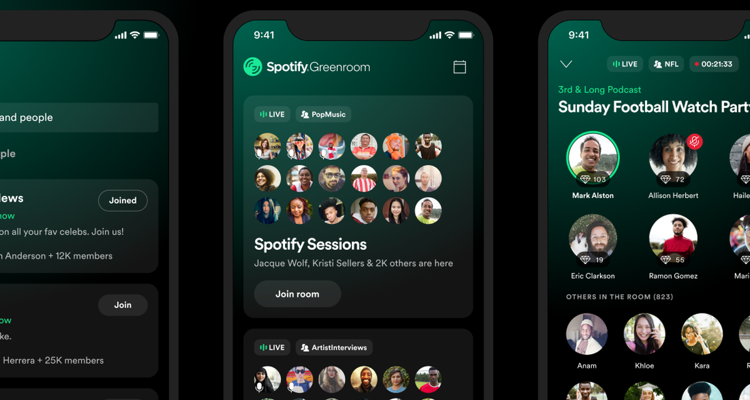 It appears Spotify is prepping to rename its ‘Greenroom’ social audio app to ‘Spotify Live’ and integrate the feature into the main app.

A new report from Bloomberg highlights moves Spotify is taking to rename its live conversation product, ‘Greenroom.’ Greenroom was first introduced as a competitor to Clubhouse when social audio apps took off during the pandemic. The app allows content creators to organize conversations around specific topics with moderated audience participation.

Bloomberg reports the rebranding and relaunch of Spotify Greenroom as Spotify Live is slated for Q2 2022.

Spotify acquired Betty Labs and its Locker Room app in 2021 before rebranding it to Greenroom. The Stockholm-based company isn’t the only tech giant focused on social audio apps, either. Facebook and Twitter both launched competitors to Clubhouse as the fad took off in 2020. Clubhouse reached more than 10 million users within the first year of launch.

Twitter Spaces and Facebook’s Live Audio Rooms are almost a carbon copy of Clubhouse’s features. Twitter has worked hard to make its Spaces something that artists can monetize to give impromptu virtual concerts for their audiences with ticketing and other features.

But Spotify Greenroom has failed to take focus among these Clubhouse clones as the world has started to open back up, and digital audio conversations have become less of a focus for connection. Spotify has put some of the same efforts it put into dominating the podcast space into live social audio, too.

Spotify recently partnered with Complex Networks to host all of its live audio efforts. It has also signed a deal with the sports podcast ‘The Fantasy Footballers’ to host weekly conversations on the platform. But it’s clear having the live audio portion as a second app isn’t working out to catch and retain listeners.

Having Spotify Live next to streaming music and podcasts appears to be the answer. It will be interesting to see if Spotify’s interpretation of live social audio will take off with these changes. Twitter Spaces have more monetization features for artists looking to earn money from their music online, so Spotify is left playing catch-up in terms of features.