Spotify Expands ‘Blend’ Playlist for Up to 10 People – Artists Included 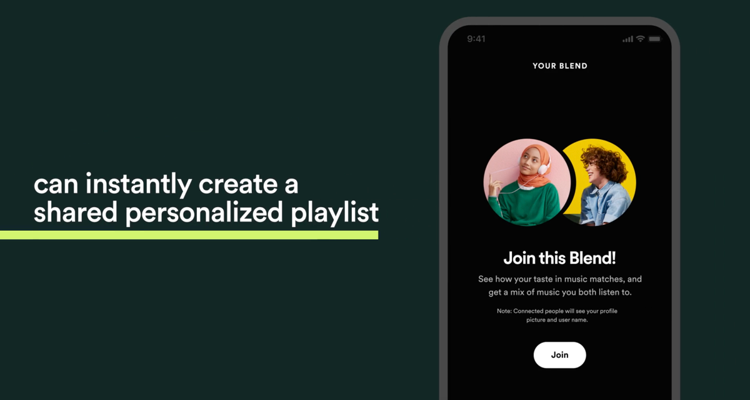 Spotify is updating its Blend playlist creation tool to support even more people – and artists.

Blended playlists allow two users to see and share their music tastes with one another on Spotify. But the feature is expanding to allow Blends with up to ten people. Spotify has also announced it is partnering with artists to create Blends with their musical tastes.

Merging a Spotify playlist into a Blend playlist with an artist will see your tastes and that artists tastes paired into the same playlist. The Blend updates daily with new songs based on everyone’s listening habits. Each user receives a card that displays their ‘taste match’ score when a song plays. They’re designed to be shared directly on social media sites like Facebook and Twitter – helping Spotify in the process.

Spotify Family subscribers already had access to something similar to Blend playlists. But now, the feature can be expanded to up to ten people and those people can be outside the family plan.

Spotify’s personalized playlists are a big selling point for many people – they’ve become this generation’s mix-tape. Sharing Spotify playlists among young lovers even resulted in the music streaming giant having to introduce a way to block people on its platform.

Spotify’s focus on its personalized playlists is another attempt to set itself apart from its competition. It remains the most popular music streaming service, but it is losing ground to competitors like Apple, Amazon, and YouTube. Spotify’s global market share of 31% is slowly declining as YouTube Music and Amazon Music, in particular, make hefty gains in the streaming world.

Spotify Wrapped is another personalization feature that draws huge attention to the service each year. Last year the company announced Spotify Wrapped Blend, allowing people to compare their end-of-year streaming stats among friends on social media.