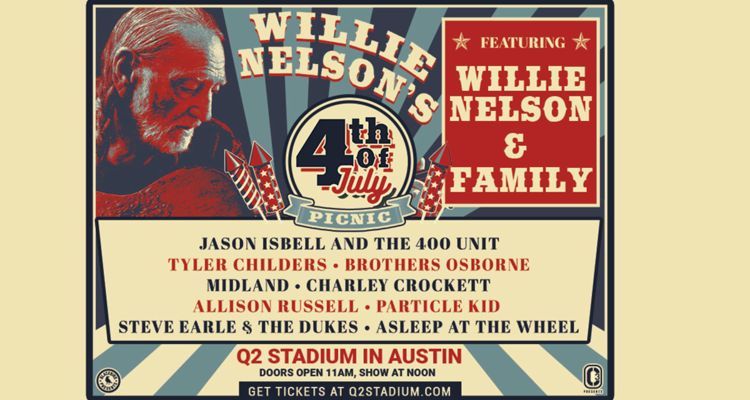 Willie Nelson’s July 4th Picnic and Fireworks is returning in person to Q2 Stadium in Austin this year.

The performance went virtual last year due to the pandemic, but the 2022 event will feature a star-studded lineup. It is also the first in-person concert at the new Q2 Stadium in Austin, TX. The event will feature Willie Nelson & Family, Jason Isbell and the 400 Unit, Tyler Childers, Brothers Osborne, Midland, Charley Crockett, Allison Russell, Particle Kid, Steve Earle & the Dukes, and Asleep at the Wheel.

“I’m so happy to be bringing back my annual 4th of July Picnic for the first time in two years,” the legendary country star Willie Nelson says. “Come on down; we missed you.” Tickets for the Willie Nelson July 4th bash go on sale April 15 at 10 am on the stadium’s website.

“Q2 Stadium is quickly becoming a host for the biggest parties in Austin, and there’s no one better to kick off our first ever concert than with the one and only living legend, and a local to Austinites, Willie Nelson,” adds Austin FC Minister of Culture, Matthew McConaughey.

“We can’t think of a better first concert for Q2 Stadium than Willie Nelson & Family,” says Austin FC President Andy Loughnane. “Willie is an iconic local artist, and we look forward to celebrating the Fourth of July holiday at Q2 Stadium.”

Fans can expect ten hours of live music, delicious food and drinks, and a fireworks show to celebrate the holiday. Q2 Stadium is a 20,738-seat stadium with a soccer configuration. But concert seating capacity brings it up to roughly 24-25,000 seats. Teams will cover the grass with flooring, and the stage will be set up below the scoreboard on the south end of the stadium.

The process of switching the stadium to a concert configuration will begin after Austin FC’s home match against Dallas FC on June 25. It will take the crew a few days to get the configuration set up for Willie Nelson’s July 4th celebration. There are a few factors that limit how many concerts can be held at the stadium.