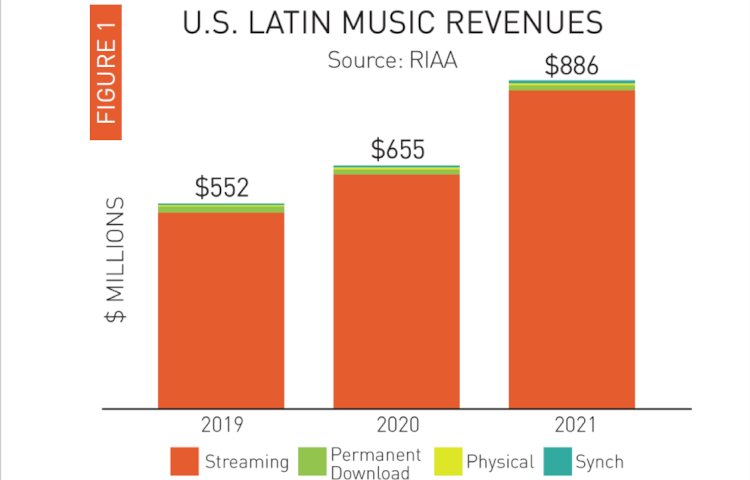 Latin music revenue cracked a record high of $886.1 million in the U.S. during 2021, according to a new report from the Recording Industry Association of America (RIAA), with streaming having generated 96.7 percent of the total.

The RIAA revealed these and other noteworthy stats in its just-published breakdown of Latin music’s 2021 stateside showing. 2020 saw Latin music generate $655 million in the U.S., per the trade association, up from $552 million in 2019. The 2021 total signifies roughly 35.3 percent year-over-year growth, against 23.4 percent YoY growth for the broader domestic music industry throughout the same period.

Furthermore, the newest of the income figures reflects “estimated retail value,” or wholesale value for “formats with no retail value equivalent,” and could be somewhat inflated as a result. Plus, it bears mentioning here that the RIAA’s data “includes estimates for both major record label and indie-distributed Latin music.”

And while 2021’s U.S. Latin music revenue marks an all-time high, as mentioned, it nevertheless “remains 15 % below the value of Latin’s strongest year in 2005” after factoring for inflation, the music industry representative made clear.

Though Latin music’s U.S. physical sales only came in at $7.7 million for 2021, the total represents a 71.2 percent boost from 2020, as vinyl’s popularity continues to grow and cassettes and CDs enjoy resurgences of their own. Similarly, the RIAA said that Latin music’s U.S. “synchronization royalties” in 2021 reached $7.7 million, up 39.7 percent YoY (and the same as physical’s income).

Lastly, in terms of permanent downloads, Latin music singles and albums alike experienced a revenue dip in the U.S. last year, the RIAA said, at $8.5 million for singles (down 8.1 percent YoY) and $4.4 million for albums (down 0.7 percent YoY).

Bearing in mind Latin music’s 2021 revenue in the U.S., Dominican artist Dixson Waz late last week released a remix of his “Toco Toco To” track with Lil Pump. Upon debuting in 2018, the original song went viral on TikTok, racking up a staggering 500 million views, according to Sony Music Entertainment.