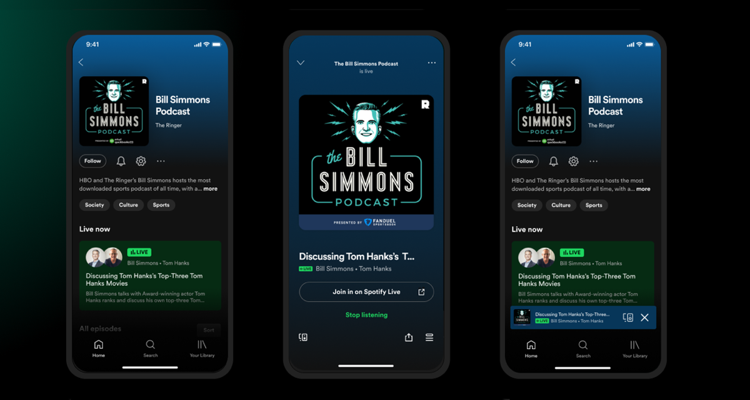 Greenroom launched in 2021 after Spotify acquired Locker Room creator Betty Labs. But the Clubhouse competitor and live audio chatroom struggled to gain traction amid a crowded field of offerings. Now Spotify is moving its live audio into the main Spotify app and dropping the Greenroom branding entirely.

Spotify Live is available as a standalone app or as a live stream function inside the main Spotify app.

Listeners can tune in to live programming when visiting an artists’ page. If they want to participate in the conversation, they can head to the Spotify Live app to do so. It’s a little bit like how Amazon Music plays certain Twitch live streams in its app, but to participate in chat you need the Twitch app.

Spotify says to kick-off the Spotify Live rebranding, it will highlight a host of audio creators. The first of those promoted programs is Off the Record with DJ Akademiks. The company is also debuting a host of new content with Spotify creators at the helm.

Call Her Daddy podcast host Alex Cooper will host an evening talk show starting on April 13. Fans can listen in as Alex hosts uncensored conversations with guests from her popular podcast. Spotify is also celebrating Swedish House Mafia’s Coachella set next week. On April 15, Spotify’s live from the desert with Swedish House Mafia will go live. Off the Record with DJ Akademiks will air on April 12, with his first guest being Waka Flocka Flame.

It will be interesting to see if the transition to the main Spotify app helps Spotify Live catch on. Podcasts and live audio are an entirely different beast than music streaming, causing a divide. Some people only want music recommendations when they open the Spotify homepage, but it is increasingly bloated with everything but that.