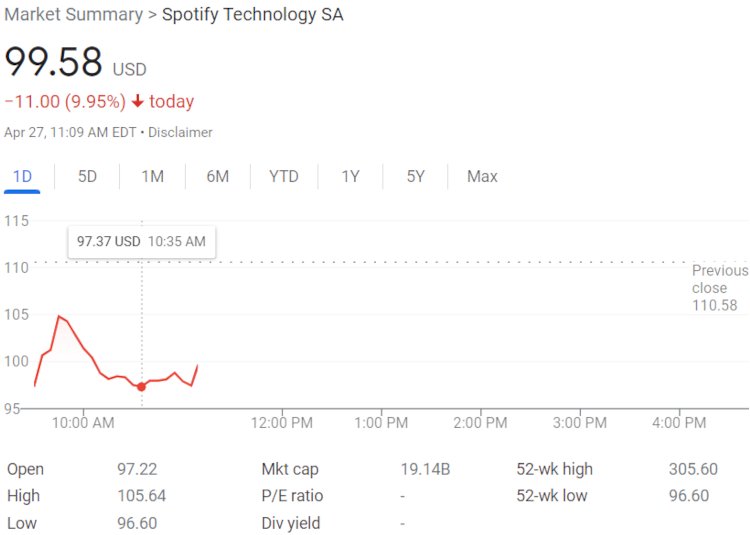 Spotify stock (NYSE: SPOT) fell beneath $100 per share for the first time in company history today after the service posted its Q1 2022 earnings.

Spotify stock (NYSE: SPOT) has fallen beneath $100 per share for the first time in company history following the release of the service’s Q1 2022 financials.

The Stockholm-based audio-entertainment platform revealed its performance specifics for January, February, and March of 2022 this morning. Subsequently, pre-market moves sent Spotify stock plummeting to about $98 per share, a decline of more than 10 percent from Tuesday’s per-share close of $110.40, and then as low as $96.80 per share.

When the market opened, SPOT rebounded past the $100 mark, still down about $192 from late April of 2021, before dipping back into the $98 range. Spotify stock has now suffered a more than 60 percent falloff since 2022’s beginning, compared to roughly 68 percent for Netflix (NASDAQ: NFLX).

The material valuation decrease arrived even after Spotify posted 19 percent year-over-year (and four percent quarter-over-quarter) growth for monthly active users (MAUs) in Q1 2022, when a peak of 422 million individuals utilized the service. The figure is in line with analyst expectations and beat Spotify’s guidance by four million.

However, it bears mentioning that March brought with it “a brief service outage that caused users to be involuntarily logged out of Spotify,” per higher-ups. Consequently, execs “believe certain affected users created new accounts to log back in, resulting in approximately 3 million additional MAUs in the quarter.”

And despite parting with about 1.5 million subscribers after ceasing operations in Russia, Spotify said that paid users improved by 15 percent YoY (one percent QoQ) to 182 million – directly beneath the total forecasted in the business’s Q4 2021 earnings breakdown.

Lastly, regarding Spotify’s Q1 2022 showing, the company said that its controversial two-sided marketplace deals attracted twice as many new customers as in Q4 2021, with an 85 percent retention rate for existing clients. On-platform podcasts jumped from 3.6 million to four million, “and podcast share of overall consumption hours on our platform reached another all-time high.”

The audio platform’s Q2 2022 guidance may likewise have contributed to the price dip of Spotify stock, for the company is banking on 428 million MAUs, 187 million paid users, and an operating loss of $207.61 million (€197 million) for the current quarter.