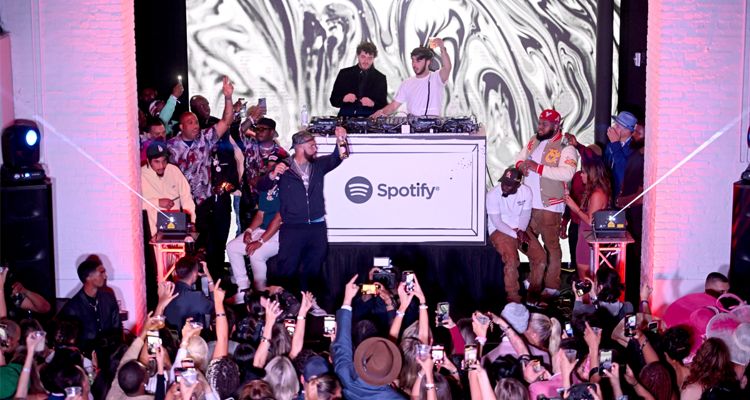 Spotify’s RapCaviar playlist helped Jack Harlow celebrate his latest album release with a party in his hometown of Louisville, Kentucky.

The special event was held during the Kentucky Derby weekend at the Ice House venue. The Talk of the Town event brought the hip-hop scene to downtown Louisville. Friends and family of Harlow joined the rapper for the occasion as he hopped on stage alongside DJ Zack Bia to hype the crowd and play songs from the album including “First Class” and “Poison.”

“My second album is about home, digging deeper and going all in,” says Jack Harlow. “I wanted to show that in a big way in my hometown this year. Just like my album, this celebration is something Louisville hasn’t seen before. Shout out to Spotify for hosting my friends and family for a special album release celebration, I couldn’t have had a better time.”

On a recent episode of Spotify’s For the Record podcast, Harlow talked about the support he’s received from Spotify. “I’ve been getting a lot of support from Spotify since before I had a big record. And once I dropped a big record, I saw the effect of the listening and all the things the platform could do,” Harlow says.

“I think there’s some sort of cohesion going on. I think a lot of my listeners are on Spotify. And I’m excited that that’s the company that’s going to be in Louisville, KY for this party – that people are going to look up and see that logo.”

It shouldn’t be too surprising though, Jack. A recent study found that most Spotify curated playlists tend to favor artists signed to major labels or their offshoots. As an artist from Atlantic Records and Warner Music Australia, Harlow has prime placement on those curated playlists.

Meanwhile, Jack Harlow’s new live tour in support of his latest album is kicking off in September. The “Come Home the Kids Miss You Tour” is presented by Live Nation and will run through the rest of 2022. Tickets go on sale on May 11 for pre-sale and May 13 for general admission.