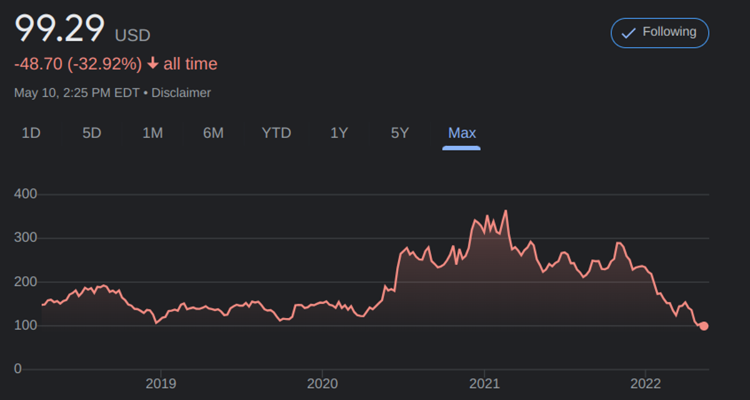 Yesterday the stock dipped below the $95 mark in after hours trading, which is the lowest its ever been. The company went public in 2018, and shares were trading for $165.90 by the end of the day. Tech stocks as a whole are a rough sector to be in right now.

The stock has continues to flirt with its all-time low shortly after reporting its Q1 2022 earnings. Yesterday the stock closed at $93.52, the lowest price so far. That amounts to a 75% decline in value over the course of around 14 months.

SPOT’s Q1 2022 quarter was actually pretty rosy from an investor standpoint. But the company’s Q2 guidance has investors wary of flatlining subscriber growth. Investors are also worried about the lightning rod of controversy that Spotify has attracted by making exclusive podcast deals with Joe Rogan.

Aside from that, the company’s paltry payments to musicians continues to make headlines, and for good reason. Streaming isn’t lucrative for artists, but Spotify has paid consistently low royalty rates. The company’s closest competitor, Apple Music, pays nearly double the royalty rates of Spotify.

Investors Are Watching Spotify After Netflix

Wall Street analysts wonder if the same pattern could repeat at Spotify. Both Apple and Google now have music streaming services that squeeze Spotify out. YouTube Music in particular is a growing force that continues to attract new subscribers at a good clip. The biggest clue here is that SPOT stock dropped a further 8% on Netflix’s earnings news.