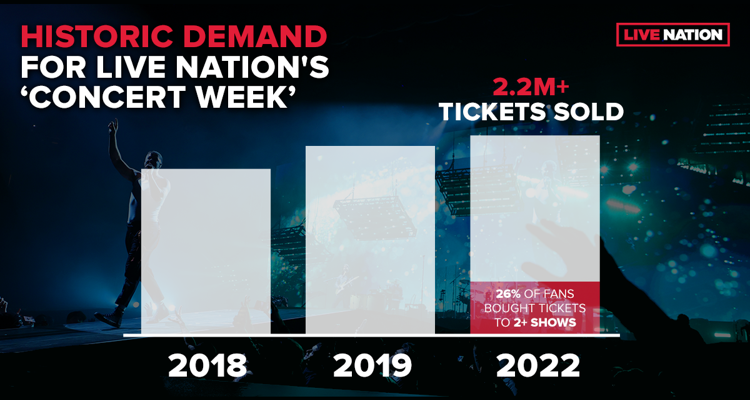 An annual celebration to herald the summer concert season, Concert Week offers access to $25 all-in tickets to over 4,000 shows across North America. Record fan demand this year led to a record number of tickets sold, outperforming the prior record in 2019.

Live Nation reports that 26% of Concert Week buyers purchased tickets to at least two participating shows. They also saw a more than 50% increase in full-price ticket sales during Concert Week as opposed to the weeks leading up to it, showing a noticeable rise in demand for tickets to live performances.

“The record breaking sales for Live Nation’s Concert Week show that demand for live events is at an all-time high,” says Kelly Strickland, Senior Vice President of US Concerts Tour Marketing at Live Nation. “We have seen that fans are willing to spend money on seeing the artists they love live over any other entertainment option out there.”

This year’s Concert Week started on May 4 and ran until May 10. Tickets included performances from artists such as Backstreet Boys, Halsey, H.E.R., Imagine Dragons, John Legend, Machine Gun Kelly, OneRepublic, The Chicks, The Who, Wiz Khalifa & Logic, Wu-Tang Clan & Nas, among many others.

“It is wonderful to see fans reunited with the artists they love, and new bands forging their futures,” says Denis Desmond, Chairman of Live Nation UK and Ireland. Live Nation UK is setting a similarly record-breaking summer as nearly 6 million fans attend Live Nation-hosted shows across the UK. “This will be a summer to remember.”

Indeed, revenue predictions for the music industry are soaring. Goldman Sachs recently increased its 2022 revenue estimate from $81.6 billion to $87.6 billion — a $6 billion increase. As streaming subscriber growth sees a slowdown, companies remain optimistic that the market sees no risk of plateauing.