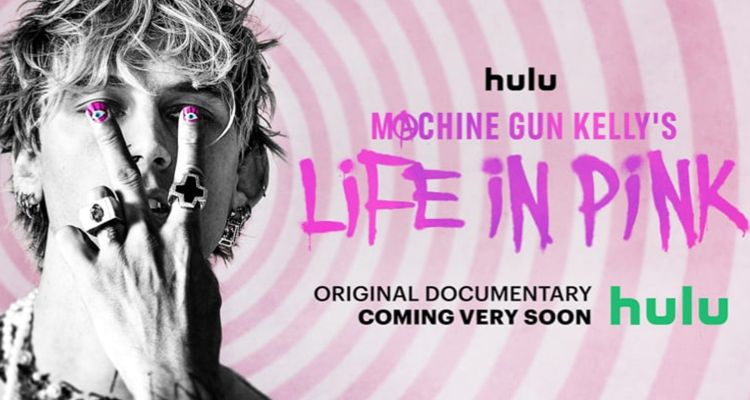 Machine Gun Kelly shares a trailer for Machine Gun Kelly’s Life in Pink, an “in-depth look at the dramatic highs and lows of an artist chasing music’s top spot.” The original documentary is coming soon to Hulu.

Shortly after celebrating the release of his comedy film Good Mourning, Machine Gun Kelly is already announcing a new film project. Hulu’s new documentary, Machine Gun Kelly’s Life in Pink, promises an “in-depth look at the dramatic highs and lows of an artist chasing music’s top spot while tackling noise from the outside world, stardom, fatherhood and more.”

The Machine Gun Kelly documentary features backstage clips, pre-fame home videos, music-making, fans, and many haters. Life in Pink is “an all-access pass, that goes beyond the headlines, into the chaotic world of Machine Gun Kelly,” this generation’s “most polarizing rock star.”

Tickets to My Downfall, MGK’s fifth studio album, departed from his established hip-hop sound as he delved into pop punk following his rap feud with Eminem. The release was the only rock album that year to debut on the Billboard 200, with the single, “My Ex’s Best Friend,” reaching number 20 on the Hot 100. His follow-up album, 2022’s Mainstream Sellout, has seen similar commercial success.

Hulu’s last original documentary about a musician, Look at Me: XXXTentacion, debuted on May 27. Directed by Sabaah Folayan, the film examines the late Florida rapper’s early rise to fame on SoundCloud to his sudden June 2018 murder at the age of 20.