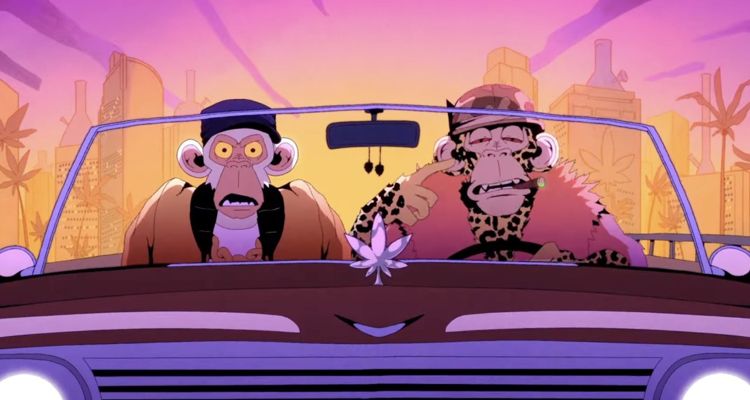 Snoop Dogg and Eminem get too high and turn into animated versions of their Bored Ape Yacht Club avatars in the music video for their new song, “From The D 2 The LBC.”

The song made its debut at the end of this year’s ApeFest, an annual event in New York for Bored Ape Yacht Club (BAYC) NFT holders. The video opens with Eminem about to record a take in the booth. Snoop sits in the control room and smokes a blunt the size of his fist.

“Yo, why’s it so smoky in here, man?” Eminem complains, getting high from the contact fumes. He and Snoop then literally go ape, morphing into their Bored Ape NFT avatars in animated segments blended with live action.


Eminem purchased his Bored Ape for 123.45 ETH (USD $452,000) at the end of last year. His OpenSea account, Shady Holdings, indicates 26 other NFT acquisitions.

Snoop Dogg owns many NFTs and has long immersed himself in crypto-culture. Last year, he revealed himself to be popular NFT Twitter personality, Cozomo di Medici. In February, he announced his plans to make Death Row Records an NFT label, and many iconic albums from the label — including Dr. Dre’s The Chronic — are noticeably absent from streaming services.

“If anything is constant, it’s that the music industry will always be changing,” Snoop said when he announced his partnership with Gala Games for the NFT release of his album B.O.D.R. (Bacc on Death Row) back in February. “Blockchain tech has the power to change everything again and tip the table in favor of the artists and the fans, and we’re going to be right at the front of the pack.”

Earlier this month, Snoop revealed plans to open a restaurant, Dr. Bombay’s Sweet Exploration, an “immersive retail dessert experience,” themed around his BAYC avatar. The rapper has also hosted events on his digital property in the NFT-powered metaverse, The Sandbox.