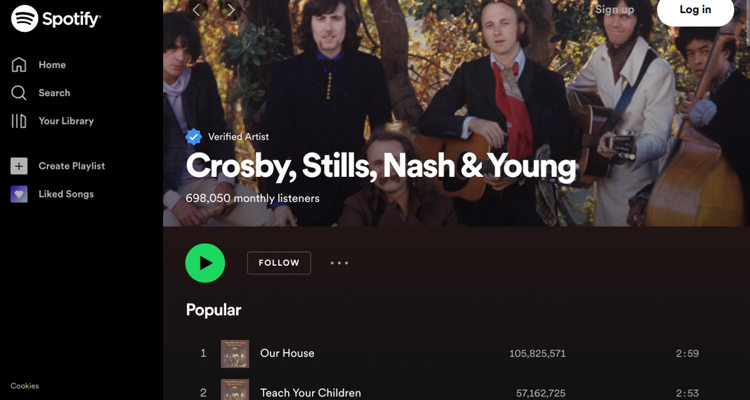 Crosby, Stills, Nash & Young music has returned to Spotify six months after it was pulled.

The group announced they would join their bandmate Neil Young in removing their music from Spotify. Neil Young’s solo music is still absent from the music streaming service after their spat in February 2022. The issue started over COVID-19 misinformation spread by Joe Rogan, who hosts the top podcast on the platform.

When asked why the music was back on the platform, David Crosby was honest with a fan. “I don’t own it now and the people who do are in business to make money,” he told a fan. David Crosby sold his recorded music and publishing rights to Irving Azoff’s venture, Iconic Artists Group in March 2021. That deal encompasses Crosby’s solo works and those with Stills, Nash, Young, and the Byrds.

“Given our current inability to work live, this deal is a blessing for me and my family and I do believe these are the best people to do it with,” Crosby said at the time. In May 2022, Crosby announced he was retiring from touring altogether. “I’m too old to do it anymore. I don’t have the stamina; I don’t have the strength,” the 80-year-old folk rocker shared.

Crosby says he got paid the only way he knows how, since Spotify doesn’t pay artists well.

“Spotify doesn’t pay us. I had two ways of making a living – touring and records. Spotify comes along, and I don’t get paid for records anymore,” Crosby says. “That’s half my income, okay? So I think I should be grateful that I can still play live and pay the rent and take care of my family. And then comes COVID and I can’t play live. The reason I sold my collection is that I didn’t have any other option. None. Zero.”

Since the Neil Young and Joe Rogan dust-up, Spotify formed an 18-member council to advise the company on policies addressing harmful content on the audio platform.