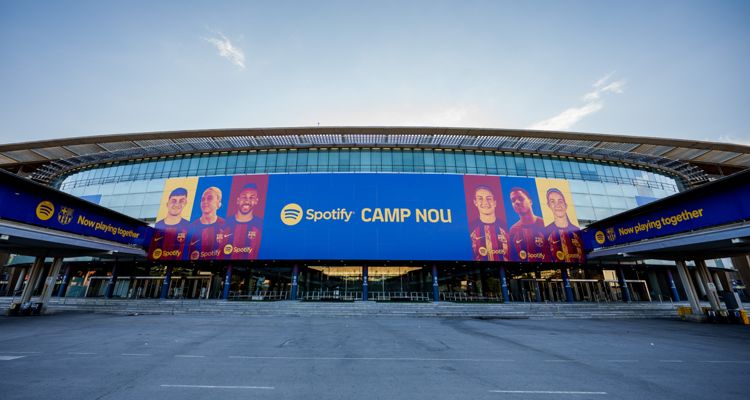 As part of the sponsorship agreement —rumored to be worth more than $300 million — Spotify becomes the Title Partner to the stadium, which bears a new mural. The mural features men and women of FC Barcelona, including Pedri, María León, Ansu Fati, Alexia Putellas, Aubameyang and Aitana Bonmati, and the name of the Spotify Camp Nou on the center and sides.

A delegation from Spotify led by Marc Hazan, VP Freemium Partnerships and Business Development visited the grounds to celebrate the partnership.

“The deal between Barça and Spotify is the first of this kind for the club and in addition to shirt sponsorship, also includes a long-term agreement concerning the Title Rights to the stadium, which came into effect July 1,” Barça says in its press release. “It will continue through the ambitious plan to restructure the entire Spotify Camp Nou as part of the Espai Barça project, whereby FC Barcelona will be converting its facilities and environs into a brand new world class entertainment experience that will be open to the whole city of Barcelona.”

Spotify will also be present inside the stadium on terrace seats, on the home and away benches, and also via various pitch level assets. When the Spotify Nou has been completely remodeled, Spotify will be featured prominently. The deal with Spotify also includes association with the Barça Academy, which promotes talent for FC Barcelona. The Spotify brand will appear on the front of the shirts of the club’s Pro Academies, where young international players are training.

Spotify will also have a key audiovisual presence in digital content created around the team’s training sessions and any content promoted and published on FC Barcelona’s social networks.